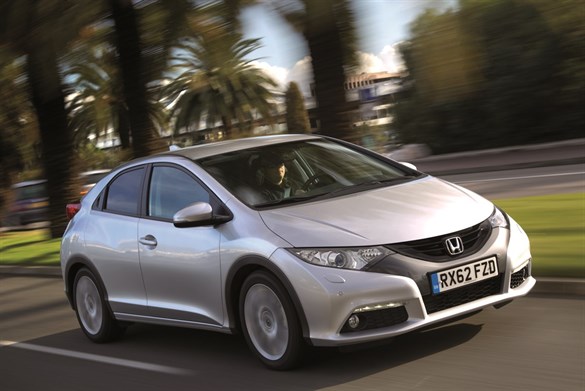 Honda admitted at the launch of its new 1.6-diesel engine that it had been slow to react to the European market’s need for a smaller capacity unit.

A strong domestic market and sales in North America mean diesel development hasn’t been a main focus for the brand.

Dealers have been waiting for the 1.6-litre diesel to help them compete against mainstream competitors for several years, leaving them to fight against lower capacity units with the 2.2-litre diesel unit which was introduced in 2003.

The trend for diesel engines has grown in Europe and they now represent 58% of the C-segment market. In addition, engines emitting less than 120g /km CO2 now represent 45% of demand.

This smaller engine will help Honda dealers increase volumes as it will be introduced to more models, including the CR-V, this autumn.

This new model offers customers lower CO2 emissions at 94g/km combined with a power output of 120bhp. That’s an impressive com-bination which stands up to the competition.

Japanese engineers have stripped out 47kg from the new engine in comparison to the 2.2-litre diesel which has helped to improve efficiency. The weight reduction also helps to reduce the amount of bulk over the front axle which translates to quite a light ride for a diesel hatchback. Honda’s Idle Stop system is fitted as standard which also helps to lift the efficiency figures.

The 1.6 i-DTEC offers more power than the Volkswagen Golf and Ford Focus equivalent engines. While it handles well, it’s still beaten by MQB platform models like the Seat Leon and Golf.

While the Civic might not beat the competition on looks or handling, it’s more efficient, more powerful and has more luggage capacity than the Golf, Focus or Audi A3.

The new variant will be available in three trim levels with prices starting at £19,400 for the SE model, £20,595 for the ES and £23,175 for the top-of-the-range EX. Specification is identical to the equivalent 2.2-litre i-DTEC cars, but with the addition of new 16-inch alloy wheels.

The price point could be an issue for dealers as it’s possible to pick up an equivalent Golf for £405 less than this new model.

What's been said about the Honda Civic 1.6-litre diesel

There are more dynamic rivals on the market, and heaven forbid we get into arguing about image and appearance. But with
Honda’s enduring reputation for reliability, if you’re in the market for a family hatch that’s practical, punchy and has the potential to be
brilliantly efficient the 1.6 i-DTEC is an ideal place to start.

While the new Golf has already won plaudits for class-leading residual values, Honda believes the extra performance of the Civic combined with class-leading low fuel consumption and competitive SMR will make the car an equally compelling proposition for fleets.

The new 1.6-litre diesel is the pick of the Civic range, but it’s no class leader. The new Golf has moved the game so much that the Civic is left struggling to keep up.