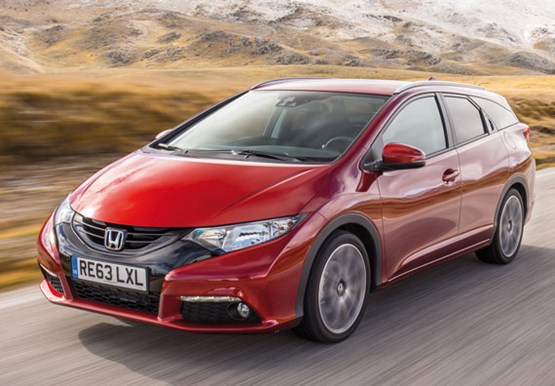 Honda developed the Civic Tourer with the brief “it ticks every box”. Practicality is the major focus point for dealers, in particular the amount of boot space.

Honda is confident there is a growing market for C-segment estate models, as D-segment registrations across volume brands have dipped. Ford and Vauxhall take the lion’s share of the market with estate models of the Focus and Astra, but Honda will be fighting against models such as the Kia Cee’d SW for a 10% segment share.

Honda’s sales plan is to continue offering 0% PCP offers from £239 to tempt buyers. It will also be offering its five-year care package, which includes warranty, servicing and roadside assist for £499.

Honda believes the Civic Tourer will sell 3,800 units in the UK. Retail customers will take the lead, with 2,100 cars  going to private buyers and the rest going to company car drivers.

The range in the UK is simple, with the choice of two engines – a 1.8-litre VTEC petrol or a 1.6-litre i-DTEC diesel – and the choice of four trim levels.

The middle trim levels SE Plus and SR will take the majority of sales and the diesel engine will be the most popular. Honda took a while to catch up with other European competitors with a smaller capacity diesel engine, but its arrival means dealers can compete. It’s really strong, with smooth performance and plenty of power, as well as offering a tax-friendly CO2 output of 99g/km and 817 miles on one tank of fuel.

The Japanese brand is moving back to more brand-orientated advertising and its ‘inner beauty’ campaign for the Civic Tourer started appearing on television at the start of February. Honda is also hoping that entering a 300bhp Civic Tourer as its car for the 2014 British Touring Car Championships will also attract some attention.

Honda is aiming the car at younger families likely to be downsizing from D-segment estates to the C-segment as its primary market. The secondary market will be empty nesters, who are also downsizing and want something practical, but which still features premium features from the models they used to drive.

The boot space on offer is impressive, with 624 litres available when the rear seats are up or 1,668 litres with all the seats folded flat.

The front end is carried over from the hatch and everything from the B-pillar back is new, extending the rear space by 235mm. Estate cars can sometimes look a bit like they’ve been ‘cut and shut’, but the designers have managed to create a design on the Civic Tourer that flows well.

Other practical features in the boot include storage for the tonneau cover, which solves the problem of having it roll around in the boot or leaving it in a garage when the Civic Tourer is being used for its load-lugging capabilities.

The seats fold flat and it is possible to remove a panel in the bottom of the boot to increase storage space for bulkier objects, such as washing machines. Customers can buy a rear adaptive damper system as a £550 option to make the car more stable under heavy loads.

What’s been said about the Honda Civic

Autocar
The Civic Tourer’s huge and versatile load space, comfortable ride and strong yet frugal diesel engine are impressive, but like-for-like it is somewhat overpriced against its competitors.

What Car?
The Civic Tourer excels as an estate, offering a huge, practical boot, a good drive and enough room for a family of four to get comfy inside. It also provides a decent amount of standard kit, and the diesel will prove cheap to run. However, it’s up against some very strong competition.

Auto Trader
The Civic Tourer has a huge boot and comfortable ride, but its high price and confusing dashboard mean it’s not for everyone. Limited choice of engines could put off some buyers.

Honda admitted at the launch of its new 1.6-diesel engine that it had been slow to react to the European market’s need for a smaller capacity unit.