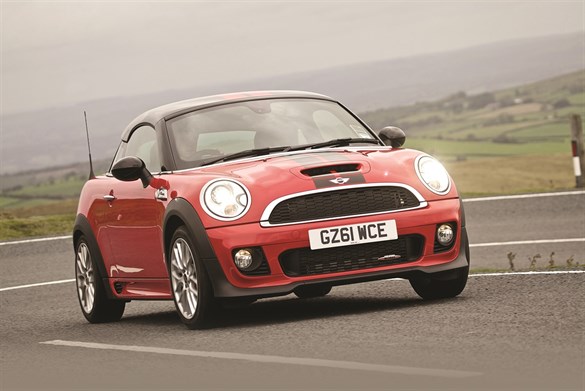 Expanding the Mini’s strong branding and focus of fun and quirky design into the two-seater coupé segment must have been a no brainer.

But the new Coupé is likely to split opinion more than you’d think. Styling is unmistakably Mini, but instead of opting for flowing coupé lines (admittedly the roof has been scooped by 13 degrees), there’s the familiar chunkiness of the Hatch, particularly from the rear. There’s no doubt Mini-maniacs will love it, but customers in the market for a sleek coupé might be turned off.

The Coupé isn’t expected to sell in droves – the idea is high appeal and small volumes. It will represent 3% of Mini sales, so about 1,500 units in its first year and it will act as a halo model for the brand. Mini didn’t rule out sales taking off beyond that.

It’s also hoping the Coupé will attract more men to what is a typically female customer base.

Power comes from four engines, three 1.6-litre petrols in naturally aspirated and turbo versions and a 2.0-litre sports diesel. Trims will be split between Cooper, Cooper S, Cooper SD and JCW. There won’t be One and One D versions as the Coupé is a “sports focused” model.

The other ultimate USP for the Coupé, oddly enough for a two-seater, is the boot space on offer.

It is 20 litres larger than the Clubman., which means that it’s possible to have a full load of shopping in the back or four suitcases.

The Coupé also features an active rear spoiler which lifts up to improve balance and grip when the car goes above 50mph. An unwanted by- product is rear visibility akin to a letterbox. It automatically lowers at 37mph and it’s the first time a BMW product has featured it. The spoiler can be activated manually via a button in the centre console “if you want to look like a poser”.

Exterior and interior build quality is high and continues Mini’s standards, but the Coupé doesn’t add anything new over other models. The seating position is more upright and more similar to the Hatch than customers might be expecting for a coupé.

Customers will get DAB digital radio, air conditioning, park distance control, alloy wheels, three-spoke sport leather steering wheel and sport stripes on the body as standard. The go –faster stripes can be taken off if a customer would prefer a low-key look.

As always, Mini will be offering a range of accessories with contrasting colour choices and different graphic decals for those that want to personalise their new Mini.

My only doubts are about those looks. I just can't decide whether it's pug-ugly or interestingly different.

The Mini Coupe, and the JCW version in particular, distills everything we love about Mini into its purest form yet.