The Impreza has become an iconic car for Subaru, helping establish the brand in the UK. On the back of success in the World Rally Championship over many years, performance versions of the Impreza have become much sought after.

But the top of the range STI version is as much a curse as it is a blessing for the Japanese manufacturer and its UK retailers. While it may be a great halo product, it tends to overshadow the rest of the model range.

With the launch of the revised 2006 Impreza, Subaru is aiming to broaden the appeal of the whole range, particularly the entry-level models, as part of a strategy to boost sales and improve brand awareness.

The cosmetic changes are mainly at the front end with a new mesh grille, new bumper and what Subaru describes as ‘hawkeye’ headlamps. 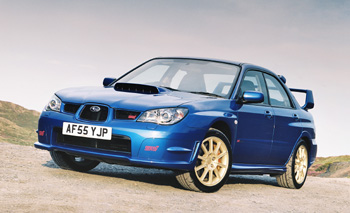 Both the WRX and WRX STI have had their 2.0-litre turbocharged units replaced by more powerful 2.5-litre engines producing 227bhp and 276bhp respectively.

The entry-level engine, a naturally aspirated 2.0-litre powerplant, has a new four-cam unit with power increased by 30bhp to 160bhp. This is the car Subaru believes can make its way on to the radar of hot hatch drivers and saloon buyers looking for something slightly different.

Although it may not have the raw appeal of the STI, it still has that special feeling.

The boxer engine creates a lovely exhaust note, and while it may feel slow compared wih the performance models, it handles superbly.

All-wheel drive inspires the confidence to throw it into bends.

At the top of the range the STI is now badged as Type UK, to distinguish it from unofficial imports, and has the recognisable gold alloys, colour-coded sill spoilers and a suede-effect interior. As expected the STI is fantastic to drive. It has pinpoint accurate steering, which is well weighted, and everlasting amounts of grip.

With a 0-62mph time of just five seconds it’s like a rocket out of the blocks but never loses its composure, instead encouraging you to plant your right foot to hear that great turbo whine. To broaden its appeal, Subaru is launching an STI Spec D (for discreet), which features a more restrained and sober look than the standard STI Type UK.

The manufacturer is hoping that this will increase sales to more mature buyers who may have been put off in the past by the STI’s extreme looks.