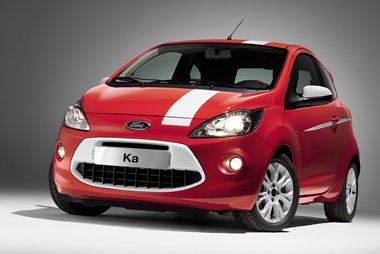 Hoping to ride on the back of Ford’s latest success, the sixth-
generation Fiesta, the new Ka should prove popular.

Ford expects almost half of this figure to consist of its top-of-the-range Zetec, while around 20% will be made up of entry-level Studio.

There is now a 1.3-litre 75bhp diesel engine, an option missing from the original Ka, to sit next to its 1.2-litre 69bhp petrol option. It is available only in Zetec trim and is the most expensive in the range at £10,195.

Customers will either love or hate Ka’s customised themes – Grand Prix, Tattoo and Digital Art. The most expensive Tattoo interior and exterior pack will add £1,200 to the cost.

He added: “Some of the attributes of the old car had to come to the new – it is fun to drive, has low servicing costs and had to be safe and environmentally friendly.”

Ford expects the Ka to get a four star EuroNCAP rating, but this has yet to be announced. Both engines fall into the lowest CO2 tax bracket with 119g/km for petrol versions and 112g/km for the diesel offering.

The Fiat 500, built on the same platform and by the same plant in Poland, is one of Ka’s core competitors along with Toyota Aygo and Suzuki Swift.

Fiat’s entry-level 500, the 1.2 Pop starts at £8,100, which means Ka undercuts this by just over £100. But Ford’s own Fiesta starts at £8,695, creating a hazy line between its two newest models – how many people would buy the sub-B segment car, if a bigger, quality model has similar pricing?

Ka is the sector leader, holding 20% of the market in 2008, a figure Ford hopes to maintain and increase. A marketing campaign will start in January.

“Campaigns will be on the internet as well as television,” said de Waard.

An Econetic version of the Ka, Ford’s green stamp, will also follow next year.

The new Ka has gained four inches in height over its predecessor which gives it a higher driving position, although it remains the same length.

Although it has the same engine, gearbox and suspension as Fiat 500, it has a different feel to the way it drives. While it doesn’t have the retro design appeal of its competitor, it handles better on B-roads, taking bends effortlessly and holding its grip on wet roads.

Bumpy surfaces are less apparent than in the 500 –Ford engineers have seemingly removed the stiffness of its suspension.

Neither engine is going to win races but both diesel and petrol models are sufficiently powerful and pleasant to drive.

There is nothing remarkable about driving the new Ka, but it does have some marked improvements on its key competitor. Ford’s reputation for driveability and style will appeal to the small-car buying masses.