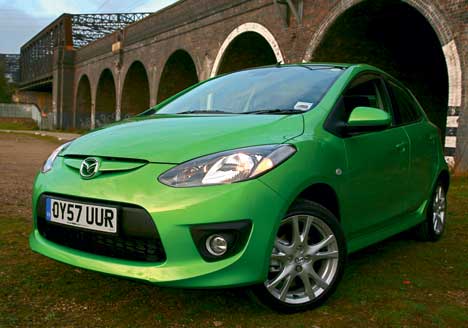 The Mazda2 has proved such a popular member of the AM test fleet that it has had constant use since it arrived last October.

We’ve been averaging about 1,300 miles a month, considerably more than most buyers would typically use their super-mini, but it is testimony to its useability, frugality, comfort and fun.

Its modern looks have drawn positive comments from young onlookers.

Not all are keen on the Spirited Green metallic paintwork, but most admire its styling.

One petrol station attendant praised the swooping lines of its flanks, but followed that up by asking if it was a Proton.

Mazda apparently still has work to do on improving its brand awareness in Peterborough.

Last week Donalds Mazda in Peterborough called to remind us that the Mazda2 would shortly be due its first service – that’s good pro-active use of the database.

The car will be booked in soon.

Donalds will also investigate the slow cold-starting problem we highlighted in our last report and a clonking noise when the driver’s door is opened.

Donalds provided great customer service last time the car needed warranty work for a faulty wheel bearing, collecting the car rather than requiring a drop-off and delivering it back freshly valeted.

The only minor niggle was the week’s delay between identifying the fault and receiving the parts needed for the repair.