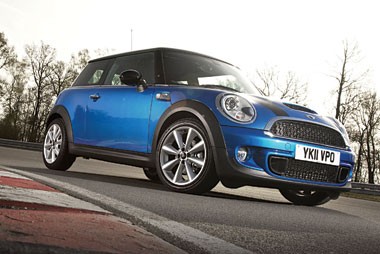 Mini had its biggest ever market share last year with a record 2.16% in the UK and the company put that growth down to new model launches and derivatives which they say keep driving the momentum forward.

The iconic brand will have a six-model range by Q1 2012 with the Hatch, Convertible, Clubman,
Countryman, Coupe and Roadster – all of which will feature the new 143bhp 2.0-litre Sport Diesel (SD) performance engine based on BMW’s 118d model.

The new engine is the most powerful diesel variant in the Mini line-up and actually offers more torque than the John Cooper Works model with 225 lb-ft from 1,750 to 2,700rpm.

The engine packs a punch and is satisfyingly quick, more so in the lighter bodystyles like the Hatch and Convertible, but it’s good in the larger models too.

Pushing the sport button opens up the throttle even further to hit home the 28% increase in power over the Cooper D and 60% power increase above the One D.

It’s deserving of its sports title, but customers could be disappointed if they’re expecting hot hatch performance.

Mini wants to keep growing that diesel sales split further with the introduction of the new performance diesel.

A new Minimalism analyser is also included which tracks how efficiently the Mini is being driven and offers tips on how to improve fuel economy.

CO2 emissions on the Hatch are at 114g/km which puts SD customers in category C for vehicle excise duty which is £0 in the first year and then £30 a year.

Company car drivers will pay a benefit-in-kind tax rate of 13%, including the 3% diesel surcharge.

Mini’s claims of 65.7mpg is possible after following the tuition provided by its analyser, but under standard day-to-day driving it was closer to 50mpg.

Mini believes there are no competitors to its SD model, with no per-formance diesel alternative model of comparative size on the market.

Apart from the SD badging, the exterior and interior trim on the SD models is exactly the same as the Cooper S trim in the Mini range and it’s still of a high design and build quality.

The SD echoes the style of the Cooper S.

All SD models have a front apron with an extra-large air intake, the familiar air scoop on the bonnet, twin exhaust tailpipes exiting in the centre of the rear apron and an eye-catching roof spoiler.

Option packs are still there for dealers to make their profits on and the average Mini customer loads up an average of £4,000 in extras.

There’s a new sport pack which features JCW styling cues for £2,260 on the Cooper SD Hatch.