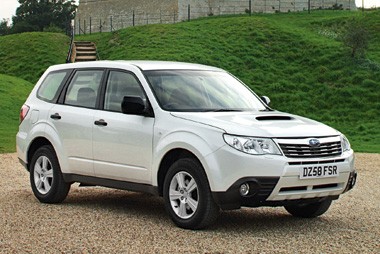 The roll-out of Subaru’s boxer diesel engine, first seen in the
Legacy in February, has now reached the Forester SUV model. It is expected to take more than 80% of annual Forester sales.

Owners of the previous Forester, which was only sold with a petrol engine, will be pleased with the diesel’s combination of low- down punch and reasonable efficiency.

Until the Volkswagen Tiguan Blue-motion arrives, there are few 4x4s with lower CO2 emissions and better fuel economy than the entry 2.0D X variant.

Like most SUVs in this segment, Forester can manage a 2,000kg braked trailer.

But buyers expecting a low-ratio transmission for tricky work such as hauling a boat trailer up a slipway, will be disappointed.

While Forester has permanent all-wheel drive, it is offered with only a single six-speed manual transmission with no low ratio.

The suspension was set up well to cope with the rough Irish roads of the press launch, providing car-like cornering stability and bump-absorbing comfort.

Inside, the fittings feel strong and solid but their perceived quality does not quite match those of its rivals.

Stability control, six airbags, climate control, heated front seats and leather steering wheel are among the standard equipment on board.