Given the combination of environmental concerns and soaring fuel prices, it is not surprising that so many headline writers are hailing the “death of the SUV” in large type.

Like most clichés, it contains some truth, but it disguises as much as it reveals.

Certainly, overall SUV penetration has fallen to 6.9% from its 2005 peak of 7.6%, but 2008 is likely to still be better than any year pre-2004 – quite sprightly behaviour for something already pronounced dead.

What is really happening is much more interesting.

Sales of the really big stuff is in freefall.

In the first half of the year, the Land Rover Discovery, Range Rover and Range Rover Sport were down by 20%-25%, and they were by no means the worst performers in the segment. 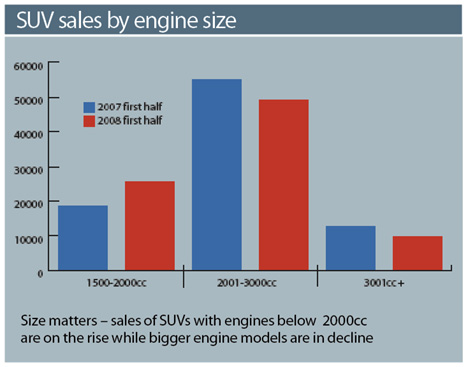 #AM_ART_SPLIT# This is partly as a result of new models such as the Volkswagen Tiguan, but also because such models are seen as more socially acceptable and more economical.

The Tiguan is doing good business with sales of more than 6,000 while the even newer Kuga is off to a strong start – Ford dealers report no problems selling their allocation to retail customers.

Rather than “SUVs die”, the headline should read “SUVs adapt or die”.

Drivers have not suddenly gone off the commanding driving position or the adventurous connotations of the breed – they just need an economic justification to stay in the segment, or even move into it.

Smaller, crossover 4x4s were once derided as “SUV-lite”, but it is hard to think of a bigger compliment today.

Underscoring the fact that SUV is still a mainstream segment (albeit one in transition) is that the normal product rules still apply.

Models that seem to have been designed with some conviction like the Tiguan are doing well, while models that still look a bit “me-too” like the Antara are struggling.

If this really was the end of the SUV, all designs would be heading south, regardless of their merits.

At the top end of the market, life is more difficult.

To be fair to Land Rover, it is only too aware of the changing market and is working flat out on the stylish LRV concept – smaller, lower, potentially hybrid-driven and far more economical.

In recent years, Land Rover has aimed to keep some of the Range Rover DNA in its smaller models.

However, in today’s climate, perhaps the right positioning is less downmarket Range Rover than upmarket Kuga.