Coating companies attempt to win over the sceptics 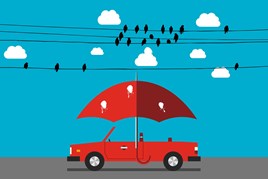 Though paint protection falls outside FCA regulation, it is subjected to scrutiny – often critical – on motoring forums over effectiveness and price.

Russell Young, chief executive of Tribos Coatings, wants to see a “mindshift” among dealers with the focus less on profit and more on quality of the product and its application.

“With no FCA protection, it’s possible to sell anything and sometimes it’s hard to establish whether cars have received the proper treatment, but dealers and their suppliers have to bear in mind the influence of social media,” he said.

And Rob Earle, managing director of Gtechniq, says: “From a consumer view, there is a perception that paint protection does not offer terribly good value, but there remains a desire to have your car looking as good as possible.”

Alan Graham, key account manager with Supagard, believes that, like all other business, paint protection should be judged on the criteria of “treating customers fairly and with confidence in the efficacy of the product”.

With 16 manufacturer endorsements and groups such as Sytner, Listers and Mercedes-Benz Retail among its customers, Supagard’s recent business wins from a rival include family-owned Harratts, with 10 outlets in Yorkshire and Honda, Renault and Nissan among its franchise. Graham attributes the gain to “our product technology, ease of application and superior technical and sales support”.

He said dealers could expect a 40 to 50% sales penetration, with top performers achieving up to 80%. Typical gross margin would be nearly £350, £230 net after allowing for VAT and labour costs for treatment application.

For those customers who want “thinking time”, Supagard offers a contact service on the approach to vehicle handover. “Last year we made around 17,000 calls, with a conversion of up to 16%,” said Graham.

Developments over the past 12 months included the option of three different paint technologies. Depending on customer choice, this means an extension of a three-year guarantee up to five years, irrespective of mileage.

Also new to the range was a fast-drying fabric sealant. “This achieves in five minutes what normally takes 45 to 90 minutes, which makes it particularly attractive for used car operations where the turnaround is quicker,” said Graham.

“From a consumer view, there is a perception that paint protection does not offer terribly good value, but there remains a desire to have your car looking as good as possible” Rob Earle, Gtechniq

A notable business win for GardX over the past year has been Vindis, with its collection of VW Group franchises. Head of sales Amanda Massey said that in that period, Vindis had increased sales of paint and fabric protection from 28 to 40%.

Two other products in the GardX portfolio covering alloy and tyre protection and SMART repair had also achieved Vindis sales gains from 10 to 18% and 12 to 18% respectively.

As with other GardX clients that include Perrys, Lookers, JCT600 and Inchcape, Massey said a significant part of sales improvement at Vindis was the company’s ongoing support of F&I teams, with performance reviews and extra training for under-performing sites.

For paint and fabric protection, a typical retail cost would range from £299 to £399, dependent on brand, with a 50-50 take-up of new and used, Massey added.

Tribos Coatings came into being through a collaborative venture with chemicals giant Dow Corning to produce a sealant for super-yachts.

“Nissan got to hear of it as a possible treatment for its soft-painted GT-R and after a shoot-out with four other competitors at Cranfield (Nissan’s European technology centre), it was judged the most effective,” said Young.

He acknowledged that after nine years, his company’s penetration into the UK motor vehicle sector remained “quite low”: “It’s difficult for new names to enter the market because of a glut of existing products and motor retail is dominated by big groups that select the provider rather than the manufacturer.”

However, he was confident that a recent five-year deal with Kia Europe to provide glass protection for its 2,500 franchised dealers would also raise awareness of its paint, fabric and alloy products.

“We are targeting family-run dealerships and, depending on volume, offering a £90 buy-in of all our products for re-sale at £399,” he said. “Feedback from existing customers suggests that our paint protection association with super-yachts is proving to be an attractive selling element.”

Like Young, Rob Earle at Gtechniq describes his company’s UK presence as “pretty much at ground zero”, mainly confined to prestige franchises like Porsche, Lotus and Ferrari, plus a handful of independents. Strongest markets were in Australia, the Gulf States and Scandinavia.

Its ceramic-based paint protection, developed from semi-conductor technology, carries a five-year guarantee and Earle reports that three manufacturers have expressed interest in having it applied at the factory as an optional spec.

Along with fabric and alloy protection, paint treatment can be applied through Gtechniq’s network of 40 detailers or accredited dealership employees. Using the detailer option would typically cost £700 for retail at £1,200, compared with £108-£850 for in-house application.

“Feedback suggests that our association with super-yachts is an attractive selling element” Russell Young, Tribos Coatings

While Tribos can point to super-yachts as evidence of “product efficacy”, Gtechniq refers to F1, with Earle commenting: “A number of teams, including Force India, use our technology to stop wheel rubber adhering to wings.”

John Boseley, MD of Jewelultra (Diamondbrite), reported that over the past 12 months his company had added four of the top 50 dealers groups to its client base, but said it was “politically sensitive” to name them.

“The market is highly populated, like any niche sector where rivals see opportunities, but Diamondbrite recognition going back to 1992 gives us an advantage,” said Boseley.

With an emphasis not just on product, but its professional application, Jewelultra offers a guarantee for the duration of ownership, with Boseley reporting claims at “a fraction of 1%”.

Trevor Hawkins, MD of Somerset-based Permashine, said paint protection and associated services “can be an overlooked source of dealership profit”, capable of achieving 20-35% sales to new car customers and 20% for used.

Permashine is a prominent supporter of motorsport as a means of promoting its products, notably with the M-Sport World Rally Team that goes back to 2009 and most recently British Superbikes.

Permashine’s customers are mainly in the south-west and Hawkins believes that what differentiates the company is that it uses its own contractors to apply the treatment.

“It can be validated for years after application because it contains a trace chemical that can be detected under a fluorescent light and is also supported by a fully audited application/certification electronic live web system,” he said.