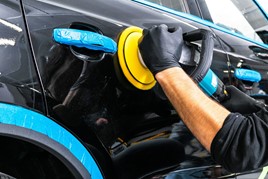 Paint protection products can help, though. A useful standby for car retailers, the products are increasingly sophisticated, but the success of the sector – alongside the challenges of retailing at the moment – means it has become very competitive, with suppliers having to constantly innovate.

One example of a product that has undergone revision recently is Reep’s Gtechniq Platinum, as Chris McDonald, the lead consultant for the product, told us: “This is a new variant on the product, which makes it easier to apply. We’ve also got a new product out called Halo, an even more flexible product that works with the self-healing properties of paint protection film.

“We also now have an interior paint protection film (PPF). The internal architecture of many cars now is screen-based, but there’s also a trend for piano black plastic inside. One wipe with a cloth and they’re covered in scratches. So we’ve developed a clear, invisible film that goes over all the interior screens and the plastics and you can, essentially, be as rough as you like with it, and it will self-heal.”

In an era where how a product is packaged is almost seen as a part of the product itself (as seen in anything that Apple sells), then canny manufacturers pay attention to this, too.

Diamondbrite, for example, has put a lot of effort into redesigning the packaging of its products, said Lance Boseley, the company’s marketing director. “We’ve completely revamped our retail packaging. We wanted to create a kind of scientific look to it. At the same time, there are some new products in there, like a ceramic product,” he said.

A look at changes in the sector also highlights just how competitive it is. Promotional techniques, for example, are becoming more sophisticated, with brands using digitalisation and branded content to give them an edge.

Gtechniq, for example, has introduced new digital presenters for its retail partners. McDonald said: “They’re like a baby iPad that the sales guys can have on their desks, so when they’re speaking to the customer, there’s a video that’s already embedded on there, all branded up with Gtechniq. They’re very expensive, but a beautifully crafted piece of kit. We’ve now sent those out to dealers, so rather than the dealer trying to dig around on his computer and try to find the video, they can leave it with the customer, let the customer watch it at their leisure, which is having a good, positive impact on conversion rates.”

The brand is also producing brand-specific video content to highlight the effect of its products. “We’ve got a big portion of the luxury market, Porsche and upwards, because we work with the likes of Sytner, Jardine, Rybrook, Dick Lovett, Leven, Peter Vardy and lots of others. What we’ve done is create brand-specific videos: for example, Gtechniq Platinum, but for our Aston Martin clients, where the whole video revolves around an Aston Martin. We’ll expand those to other brands like BMW, JLR, Audi, Ferrari and Porsche. Hopefully, by the beginning of the new year, those will all be out.

“That’s a big investment for us, but we’re making it because that’s what the dealers are looking for, rather than just a generic brand.”

Diamondbrite has been even more adventurous with its latest video, which Boseley describes as “a combination of Dynamo meets Top Gear”. Used by salespeople to show to the customer, the video is a new approach. “It’s an entertainment idea, rather than, ‘here we go again, another features and benefits’ kind of thing. We launched it in June and everybody seems to like it. It’s a minute and 40 seconds long and it’s made that length for a purpose: any longer than that and I think people start to lose interest.”

This use of video has also led to a new video imaging product for Diamondbrite, called Ultra-vision, which is used by service and repair personnel at dealerships to record footage to show the customer what work is required, or for a prospective customer for a car on sale to see it remotely.

Giving tools to retail partners to help them sell paint protection products is another important area for suppliers.

Peter Carter from Tribos said: “We get involved in contact management every six to nine months. We attend sites, so the valeters take a four-hour training session, a physical training session.

“Then we train the sales guys, at least once per year. We have an online platform that was introduced about 18 months ago, to test their product knowledge.”

Gtechniq’s approach has been to introduce a professionally designed and scientifically developed mobile detailing pod for dealerships.

McDonald described the process: “We professionally train our dealers and we support them technically as well, but one of the challenges they all have is if they’re going to compete against professional detailers, they need the right equipment, the right lighting to be able to see what they’re doing.

“So we’ve developed a detail pod. There are three projections on each side of the car. It uses direct LED and a diffused LED at 40-degree angles. The direct LED will pick out certain marks and imperfections on the paint: the diffused will pick out others.

“You can use them separately or together, along with halogen and sunlight. So you’ve got four different shades of light and blue light, so you’re really getting to the level of the professional detailers.”

Having senior staff who understand the market is also vital, as Supagard’s recent appointment of Craig Hepworth as national sales manager reflects.

Hepworth has worked in the industry for 35 years, both in retail networks and for manufacturers such as BMW.

“I’m going to have to become the go-between for what’s going on at the sharp end with the dealers, but, equally, communicating back any initiatives that we’re coming up with for developing in the office and getting input from the field team before we launch anything,” Hepworth said.

Supagard is also one of the companies that is expanding its markets – and, as a result, its manufacturing and distribution facilities.

Head of sales Alan Graham said: “We are exporting now into various markets across Europe, the Middle East, and Asia.

“We’ve been exporting for three, four years now and it continues to grow at pace. The UK’s still our number one market, but the export division is developed and is important from our international perspective.

“So, we’ve had a recent expansion at our warehouse facilities in Glasgow. It’s quite a significant expansion, a secondary site that’s the result of growing demand, both from the UK and internationally.”

Gtechniq has also expanded, thanks to greater global sales. McDonald said: “Within the factory, we’re doubling the capacity and we’re also opening a new, additional factory next door. Gtechniq is a global brand, having launched across Europe, Australia and the UAE – and we’re about to launch in America.”

Paint protection product manufacturers may be taking different approaches to make themselves better suppliers to the automotive sector, but they’re all approaches that are working, helping them to compete, expand and innovate.