Cleaning up in the outsourced valeting sector 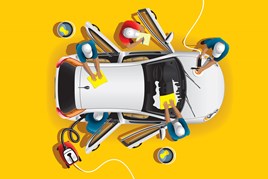 In a booming, but highly competitive, new car market, dealers are working hard to attract and retain customers. New showroom designs, more focused personal service and social media interaction can all help to create a point of difference.

However, consumers love nothing more than a shiny car. Our modern culture places a great deal of emphasis on appearance, so dealerships have recognised how important that box-fresh, new car look (and smell) is to their customers.

The added value that valeting provides is now frequently supplied by third-party companies, many of which are highly professional outfits with multi-million pound turnovers and nationwide coverage.

As the new and used car markets have grown in recent years, these companies have grown with them, providing a service that consumers appreciate – and, increasingly, are perhaps coming to expect. But it’s not just about valeting these days, as companies diversify into providing other services to their customers.

Motorclean is a case in point. The company has expanded rapidly in recent years and now has a turnover of more than £50m. It’s continuing to grow, too, with recent new business wins including Scotland’s Macklin Motors, part of Vertu. But the main basis for its growth is investment, which underpins its core service, and diversification into new areas.

Chief executive Steve McBrierty told us: “The first thing we put money into is infrastructure: IT, management development, and valeter resourcing and training. Having secured customers, the objective is to provide quality services, so the three core products are valeting, facilities management, and imaging and videoing. But we also do SMART repair, inspections and some driving.”

Autoclenz is another of the big players in the market with a turnover of around £36m. It has 360 valeting bays around the country, which valet a total of around 30,000 cars each week, with contracts including Pendragon, BCA, Europcar and Sixt.

“The marketplace is changing: dealerships are still moving towards outsourcing valeting, because it’s not a core skill of their business” Steve McBrierty, Motorclean

Sales director Martin Peters is buoyant about new business wins. He said: “The target for new business this year is somewhere between £4m-5m a year. We’re already tipping towards £7m. We just launched with Eden Motor Group, Motorpoint, Pendragon, and we’ve grown with Inchcape Retail, as well as new sites for BCA and Jardine’s.”

Peters added: “There’s a lot of change. That may not be necessarily a move to outsourcing, but existing outsourcing clients are certainly shopping around. I think the reason for that is differentiation.

“I’ve been in the industry with Autoclenz for 20 years, when valeting was valeting. Today, that’s about 25-30% of what’s actually going on. It’s now about the customer journey, how the valeting company can help the output of the dealership, keep its customers, make sure that not just the valeting of the cars is right, but so is everything else we can do to enhance the customer journey for that dealership. That’s probably the major change over the last two to three years. It’s about added value: the little things you can do at minimal cost that can have a maximum impact with a customer.

“We offer a customer collection and delivery service, using fold-up electric bikes that fold up and go in the boot of a customer’s car. That works really well inside the M25.”

Approved Valeting, with 25 sites from Southampton up to Yorkshire, is another company that is expanding, having doubled in size in recent years. Some of this increase has come on the back of work for BMW, Honda, Ford, Ferrari and Maserati dealerships, including Sytner, Lookers, and new business wins including Benham Wolverhampton and Pendragon. Other clients include the Motor Depot car supermarket chain and Click Car Credit.

“Valeting’s funny. It’s like changing your doctor: they could be performing OK, but the attitude of some groups is almost ‘better the devil you know’ ”Steve Fairhurst, Falcon Car Care

But, like Motorclean and Autoclenz, Approved Valeting’s expansion has been helped by offering other services: in its case, it’s transportation.

Director Justin Bancroft told us: “About two years ago, I bought one car transporter to move cars for Sytner group: now we’ve got five. We’ll probably look at another couple at the back end of this year. We’ve also just got a contract from British Car Auctions, so it’s going well.”

Falcon Car Care, which has been in the industry since 1974, ascribes its continued success to primarily understanding its clients’ business and supplying a service that mirrors their high standards.

Steve Fairhurst, the company’s marketing director, explained the company’s philosophy: “We understand the pressures they’re under from brands. We also understand that customer expectations are higher than ever and the aesthetics of the vehicle are incredibly important. The best way to get

consistency with a valeting team is to ensure they’re fully supported and they have the right equipment on site.”

And what of the future? Overall, there’s a lot of confidence in the valeting industry, but it is not without its challenges.

One of the main issues is attracting and retaining the workforce, with The Modern Slavery Act 2015 already taking effect.

Autoclenz’s Peters identified the issue and the knock-on effects: “It’s critical that you have complete confidence that the people within the business are legally entitled to work in this country, because the fines are considerable. Not just to the outsource company, but also to the customer engaging with that company.

“I know that out of all applicants that apply to work for us, a third do not pass our compliance: they’re either illegally working in the UK or their paperwork is counterfeit. Customers are waking up to being more aware of that, which has changed in the last 12 months.

“So the ability to attract and retain the correct labour is an ongoing challenge. We have to offer a real opportunity for self-employed sub-contractors to come and work with us – and choose to work with us and meet our criteria – rather than work with anyone else. And that generally means making sure that the rate we’re paying is more than anyone else, to get the right people – which, of course, then affects your pricing.”

But as long as suppliers can continue to recruit and retain staff, there are opportunities for continued growth and success, despite ongoing changes.

McBrierty told us: “The marketplace is changing: dealerships are still moving towards outsourcing valeting, because it’s not a core skill of their business and it makes more sense to be managed by someone for whom it is a core skill. I see that change continuing.

“There will also be increasing consolidation within our sector because, as dealership groups consolidate, they will demand the level of service that smaller valeting companies will struggle to deliver.”

Although, as Steve Fairhurst pointed out: “Valeting’s funny. It’s like changing your doctor: they could be performing OK, but the attitude of some groups is almost ‘the better the devil you know’.”

The overall economy – and the impact of Brexit – will also offer its challenges.

McBrierty said: “I think that when you look at the next 12 to 18 months, it’s going to be challenging for everybody.”

Fairhurst added: “I think there’s been a lot of worry about the fallout with Brexit. But companies will still need valeting, so we feel a bit more upbeat about it than we possibly did 18 months ago.”