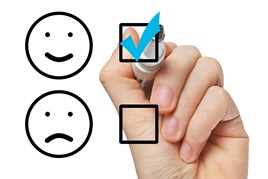 Tackling the threat of fake reviews

Online customer reviews are a key indicator of business performance, with even negative comments, if handled properly, offering potential benefits.

However, along with the furore over ‘fake news’, review sites have been infiltrated by bogus customers. Typically, these are a business rival or a disgruntled ex-employee posting critical comments or from companies engaging third parties to promote excellence.

Noting that more than 50% of UK consumers either read or post reviews, the Competition and Markets Authority (CMA) warned that writing or commissioning fake reviews can lead to civil or criminal action. Last year, the CMA took action against an online marketing company that posted fake reviews on behalf of its clients.

“The last few months have undoubtedly shone a spotlight on the reviews industry and drawn into question the legitimacy of online customer reviews,” said Matt West, chief marketing officer of Feefo.

According to Feefo’s latest research, about 75% of consumers are worried about the issue, with only 7% saying they completely trusted reviews.

“Interestingly, despite this scepticism, the actual opinion of other people is still held in high regard, with the majority (69%) generally trusting the recommendations of fellow shoppers,” said West.

He said businesses can put in place measures to assure customers. These include using an independent, third-party company to verify the reviews, ensuring all reviews are published and are 100% genuine.

“Because we operate a ‘feedback by invitation only’ model, which means we only invite customers who have directly engaged with the brand, product or service to leave feedback, it ensures all reviews are from genuine customers,” said West.

Feefo offers the following tips to spot a fake:

■ Language: Genuine reviews are moderate in their tone, whether good or bad. Look out for extreme language.

■ Frequency of reviews: If the business has had a surge of positive service reviews in a short period of time (half an hour to a few hours), this can be seen as a red flag.

■ Review platform: Check to see if the review has been posted via an independent reviews platform. How trustworthy is this platform? Are the reviews verified.

■ Anonymous reviews: Where you can, cross-reference the reviewer. Are they anonymous? Have they left more than one review? Are they all negative or positive? If they’ve only left one review, or multiple reviews that sound similar, tread carefully.

Neil Smith, director at used car company Imperial Cars, blamed a business rival for a “bad experience” with a series of fake reviews that took two months to resolve.

“The problem is never knowing how much business we may lose because of them (fake reviews) and you can’t be too vocal about disputing them, otherwise consumers get suspicious – a case of ‘he doth protest too much’,” said Smith.

What are the benefits?

Smith said use of Feefo and JudgeService over the past four years had proved “a very positive way of improving customer experience and the culture of the business”.

James Westlake, managing director of Trustpilot, pointed to the latest research carried out by his company and the Centre for Economics and Business, which predicted 20% of car sales are likely to take place online within the next 10 years.

“The relationship between dealers and manufacturers risks being further marginalised unless dealers make full use of digital growth, with customer feedback playing a vital role in building relationships. Some people may be confident enough to purchase purely online, but there will always be those who want face-to-face contact in the transaction process.”

How to encourage customer reviews

Neil Addley, managing director of JudgeService, said forms sent to every customer involved in sales and aftersales generated a response rate of about 40%. The main route of contact was emails, followed by texts, but “there’s an element of postal because we don’t want to disenfranchise those who don’t have access to digital devices”.

Use of visuals and a monthly prize draw helped combat “form fatigue” and cut the abandonment rate to about 3%.

“Consistency of approach rather than cherry-picking customers ensure we get a fair balance rather than the highly motivated detractors,” said Addley.

Widgets provide access to social media platforms selected by dealers, along with an application programming interface (API) to pull data that may be of particular interest for analysis.

Addley reported a “huge uptake” of survey completion via mobiles over the past few years. Westlake confirmed the trend: “That calls for a re-think on presentation of the material. Split testing has shown that the more visually attractive it is, the more likely it is to be seen as just another piece of marketing.  So we keep it vanilla – functionality over design.”

How to handle negative comments

Addley said that sheer volume may create “some problem areas” in reviews – no spare keys, for example, or the promise of a valet before next-day collection without checking that the valet bay may be already full.

“It’s important to have a right-to-reply option for each posting and to deal with any issues within one working day, or maybe within minutes because of the risk of a complaint going viral,” he said.

“Above all, diplomacy is key. We have a saying in this business: ‘Never pick an argument with a pig because the pig will enjoy it and you end up getting covered in mud’.”

West said for other customers reading your reviews, how you are seen to handle problems is an indicator of professionalism: “By publicly responding and resolving a negative issue, you not only turn a potentially reputation-damaging situation around, but also give potential shoppers a demonstration of the service they can expect.

“From our research, more than half of consumers using review sites would be suspicious of a company or product if there weren’t any (negatives), suggesting that a robust

and balanced view is more influential than reams of positive feedback.”

Imperial Cars sells 800-900 used cars a month and Smith said 90% of customers would recommend the company: “Negatives tend to be about miscommunication in the sales process – spec or warranty, for instance – and all need to be nipped in the bud. Otherwise, they could escalate.

“From a personal standpoint and my experience of customer buying activity, companies are normally assessed on their star rating, perhaps drilling down to a few reviews and wanting to see one or two negatives to help offset the feeling of too good to be true.  If it’s an 85% to 90%, that’s good enough.”

Westlake recalled one dealership with a low conversion rate from MOT failures to repairs.

“It reflected lack of trust, with some reviewers complaining about how much it would cost to get repairs done at that dealer and so they looked elsewhere,” he said.

“They created a new role at the MOT station, someone who was not a mechanic, but with good people skills, who explained in layman’s terms what had caused the failure, rather than someone who said ‘this part needs replacing and it will cost £300’.”

Addley said: “Who is responsible for this (feedback and appropriate response) depends on the size of the organisation; at one time there would be a web manager, but we have seen an explosion of roles dealing with customer service.

“Having the authority (to deal with complaints) delegated by the CEO is more important than the seniority of the individual.”

Westlake agreed: “There may be different roles between, say, a customer contact centre dealing with specific issue and those responsible for social media managing overall review content.”

What can dealers learn from reviews?

West said: “The ability to drill down into specific feedback also enables dealers to improve their service offering and communicate effectively with customers, ultimately leading to cost efficiency and automation. For example, the data can be used to identify most popular products by revenue.”

Addley said the “huge reporting suite” offered by JudgeService gives dealers the opportunity to look at trends within business and identify training needs.

“We are working on some statistical analysis to clearly establish a relationship between customer satisfaction and loyalty and advocacy,” he added.

Westlake said online reviews should be viewed as complementing traditional word-of-mouth – “they are badges of reputation, consumer confidence-checkers, trust-builders”.

He believes that this approach should lead dealers to re-balance their websites.

“Traditionally, the emphasis has been on promoting product and services, but there’s a risk of the consumer looking at the page(s) and saying ‘OK, it’s just another dealer’ and clicking to another,” said Westlake.

“There should be greater prominence of reviews, rather than just a banner at the top of the page. ‘Hey, here’s what our customers are saying about us, here’s how we’re are responding to make our service even better; in short more front-loading of material to build and sustain relationships.”