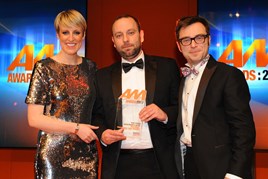 Anyone promoted to run a dealer group’s biggest site could be forgiven for taking time to bed in, but when Nick Beevis took over Perrys Aylesbury, it was on the eve of a plate-change September and, within months, he had closed two loss-making departments.

It has paid off for Beevis – he grew profits at Perrys Aylesbury by £1.2 million in his first year, which contributed to him winning the AM Award for general manager of the year.

However, when he joined Perrys as an accounts assistant in 1998, aged 17, he never expected  it would lead to the position he holds today.

“It was just a summer job for me to pay for a holiday,” he said. But the allure of the sales floor was overwhelming and by 2001, Beevis was selling cars at Perrys Milton Keynes.

In 2007, following a stint in fleet and commercial sales, Perrys promoted him to controller for Peugeot new car sales.

Beevis first joined its Aylesbury site in 2010, as sales manager for Ford and Seat. He left in 2014 to run a standalone Ford dealership for a year before his current role became available.

“I always wanted to come back to Aylesbury.  When the opportunity arose in April 2015, I knew I wanted it. I’d have preferred to have a couple of years under my belt first, but I went for it.”

Perrys felt he was ready for the challenge and Beevis started in August 2015.

“My first full month was a plate-change month – it was a very strong September.”

Continuing demand for new cars in 2016 allowed Beevis to increase sales, volume and profitability from the first month.

Beevis has a keen eye for opportunity – an attribute which has served him well, not only in his personal development, but for the benefit of the business.

He quickly realised the dealership could operate more successfully if it treated every manufacturer differently.

“It’s very easy to have one standard for this dealership. We are not a ‘standard’ dealership – we are unique, so we have to operate differently.

“Our earnings opportunity from every manufacturer is different. Our routes to market are different – some franchises are more PCP-led than others, for example.”

In addressing those differences, Beevis paid credit to both the group and the Aylesbury management team.

“We had to get the brand champions in place for each manufacturer. Luckily, I came to a very stable management team with strong knowledge and it was quite easy to look at how to maximise each brand. With some, you’re going for volume, some you go for margin.

“I had fantastic support from the group with this – we are able to go to manufacturers every quarter and entertain any offerings that are there.”

By actively engaging with offers, the dealership grew incentive income by 87% in one year.

However, Beevis also faced some challenges. One of his first big decisions was to remove fleet work from the Aylesbury site and focus on retail customers.

“We were feeding our workshop with fleet work. It was stopping our customers booking in because our lead times were too long.

“It’s a big decision to say ‘let’s stop fleet’. When you take into account the additional costs, you had to ask was this profitable or was it holding us back?”

The Aylesbury site operated its own bodyshop with a staff of 30, but this was also losing money, so Perrys Group decided to close it.

Beevis explained: “Financially, it hadn’t worked for us for a number of years. It was a tough decision to close the bodyshop. We were dealing with people’s employment and people’s lives.

“Looking back, it was the right decision. We did it in the right way and everybody that left us was in employment before their final day.”

What Beevis did instead was launch a SMART repair business, which now has eight employees and runs seven vans serving local Perrys sites and local dealers.

“We haven’t increased our group spend on paint or paintwork, we’ve just kept it internally. We are big enough to service ourselves. We should be able to do our own paintwork, servicing and repairs,” he said.

His next initiative was to purchase Tring Signs.

“It already did all the sign-writing for our vehicles and the opportunity arose to purchase it, so we did.

“Already, it is working for us. We are producing health and safety labels for the entire group, and doing all the vehicle and van livery locally.

“What we are doing is making ourselves self-contained. It has added a revenue stream for us and provided a level of service for the local Perrys and non-Perrys dealerships.”

For Beevis, having a happy workforce is paramount.

“I’m a people person and I like to spend as much time as I can with our employees. If you engage with your employees and you help them, go the extra mile for them, they repay you time and time again.”

Having a large team is challenging, but Beevis believes it’s important to work to your strengths and never stop learning from what others are doing.

“We have all of these businesses and opportunities – I don’t know everything and I’m still very much learning, but I want to soak this up and see what other people are doing.

“I want to continue on this journey that I started and see where it can take me,” he said.

“The job I have here is ever-changing and I am nowhere near finished. I get excited by the possibilities for this site. I wouldn’t want to put my name forward for anything until I can say I’m 100% happy with what I’ve achieved here.

“The possibilities are endless and that’s the bit I’m looking forward to.”