Peugeot optimistic about dealer opportunities in 2016 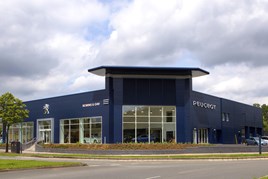 1Although Peugeot’s year-to-date market share at 4.26% is up on 2015 as a whole, it is a third of a percentage point behind the same two months in 2015 and a long way from the 8.38% Peugeot enjoyed at the turn of the century.

However, Peugeot UK brand director Neil Moscrop, who is retiring after more than three decades with the brand, is confident that he leaves incoming Peugeot UK managing director David Peel, who for the last six years has been running the Peugeot Citroen Retail Group, with reason for optimism.

Moscrop believes a restructure of the remuneration programme offered to the brand’s 226 franchised outlets, improvements to its Just Add Fuel scheme and a vigorous pursuit of online leads will all reap rewards in 2016.

Doing away with traditional targets

In June, year-to-date retail sales were down 10%, but Moscrop said the effects of the changes began to be felt in the fourth quarter, with sales up 6% on Q4 2014.

Moscrop said the Retail Share Payment allowed Peugeot to do away with traditional targets. He said: “We look at a dealer’s area of influence and it’s as simple as the bigger the market share you get the more you earn.

PEUGEOT 108
Peugeot’s entry-level offering is its
second-biggest seller, with 19,482
registrations in 2015, most of them
retail. Prices start at £8,345 for the
Access, available from £115-a-
month on the Just Add Fuel
scheme.

“It’s a pound-per-unit payment based on market share. The beauty of it is that it’s completely the same for all dealers.

“The earnings start at 4% and go all the way through to 9%, so our top quartile get over 8% market share. It means people who might have felt disengaged with the franchise are on the ladder and can then move up.”

Moscrop said a Peugeot franchise can expect to achieve an average of £1,200 a unit in profit, 6% car market share, 7% Motability market share, with three-quarters of dealerships earning a 1.3% return-on-sales.

Peugeot recently completed the process of cutting its specialist business sales centres – which specialise in fleet and commercial sales – from 90 to 60.

“With Fleet Volume Reward, there’s no target. It’s a very simple three-month threshold programme and the more you sell, the more you earn.

“Over the last three years we have reduced the amount of short-change cycle business that we do – it’s one of the reasons that our share has declined – but we have 60 business centre dealers and they have grown their sales over two years by 11,000 units and they’ve grown from just under 200 cars per dealer to just over 400.

Moscrop said the introduction of telematics-based insurance to Peugeot’s Just Add Fuel scheme – which has opened up the 208 and 2008 to a younger customer base – will prove key in the coming year.

The scheme has already proved popular on the 108 supermini, which sees 80% of its sales delivered via PCP, with 60% of those part of the Just Add Fuel scheme, which includes servicing and insurance.

“It’s as simple as the bigger the market share you get, the more you earn” Neil Moscrop, Peugeot UK

Moscrop said: “With 208 and 2008 now available as part of Just Add Fuel, we think it will mean a mum or dad can buy a family car and put in a telematics box so that their son or daughter can drive it.”

Peugeot aims to generate more sales via the internet following the introduction of a web-based lead management system and internet training for sales staff in 2015.

Moscrop said Peugeot’s approach to the internet was focused on lead generation rather than completing sales online and added that leads generated online during December increased by 300% year-on-year.

Sales staff have been trained on how to respond to emails and online enquiries to engage with potential customers rather than simply acknowledge their interest and use an iPad-based system to capture customer data in showrooms.

The brand’s own website, meanwhile, has been updated, with pop-ups to allow customers to register interest and a used car valuation service that comes with a finance calculator.

Peugeot will launch no products this year, but an updated 2008 has already been delivered to showrooms with a more rugged, SUV take on its original crossover looks.

Dealerships are also in line for a facelift. Moscrop said while half of its franchises had adopted its Blue Box corporate

identity, the brand was introducing a new interior look that it hoped to complete within two years.

PEUGEOT 2008
Peugeot’s crossover hatchback
achieved 18,850 registrations in
2015, more than half of which
were in the fleet market.

He said the change would represent a £100,000 investment for most franchises.

The new appearance is key to Peugeot’s targeting of a 5% market share and the aim of being known as the UK’s best “high-end generalist” on the market.

Moscrop said the network is well positioned to make the changes and start producing results. He said: “The range is the youngest it has ever been. We don’t have a new car launch this year and that means we can work on maximising what we do.

“Now we have to improve our performance in terms of sales in 2016. Dealer profitability is going to substantially improve.”