Preparing for the valeting bubble to burst 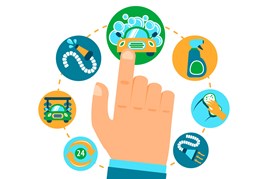 Valeting companies enjoyed a bumper 2014 as a result of the unprecedented growth in new car sales, and the pace of growth is continuing this year.

However, the valeting market is hotly contested, with competitors vying for contracts on thin margins. One consequence of that is a shift in emphasis towards customer service, rather than just competing on price.

As car manufacturers raise their targets and expect dealers to deliver on customer service, a sparkling car can do wonders for customers’ first impressions and when they come to fill  out CSI surveys.

Dealers have cottoned on to this and an efficiently run valeting team now plays a key part in hitting those CSI targets, which are essential to earn manufacturer bonuses.

Following a management buyout in 2012, Autoclenz has refocused its business around customer service.

Martin Peters, Autoclenz’s sales director, believes the industry had seen valeting as a commodity, but is waking up to the importance of customer service, rather than just looking for the lowest price possible.

“It’s not just about cleaning cars anymore, there needs to be added value and a focus on customer service to keep retail customers coming back,” he said.

“A lot of dealers have been doing cheap and cheerful, but the top players are realising that it’s not just about the lowest-priced invoice.

“Dealer groups are still looking at profit and loss, but the industry is changing and there are big incentives put behind customer service. Yes, we might cost a bit more than the competition, but you’re making an investment in the right partner to deliver on the right level of customer service.”

“I think we’ll see the industry lean more and more towards outsourcing due to the cost base ramping up because minimum wages are rising” Martin Peters, sales director, Autoclenz

The business had an annual turnover of £36 million in 2014, £25m of which came from Autoclenz’s core valeting business (the company also offers SMART repair). It won £7m in new business last year, double its target, and has already reached its annual target for 2015.

Peters said: “September is always our busiest time, not just because of the plate-change and new cars, but due to the amount of used trade-ins going through the industry.”

Autoclenz works with the top 10 in the AM100, as well as BCA and Europcar.

“I think we’ll see the industry lean more and more towards outsourcing due to the cost base ramping up because minimum wages are rising.

“Our job is to flex with demand too, so dealers can increase or decrease the amount of valeters depending on what they have going out of the door.”

Autoclenz’s account managers visit sites weekly to make sure staff are delivering as they should and dealer customers are happy. The company has also introduced an online Net Promoter Score system, which lets the management at each individual site rate how Autoclenz is performing. This can be viewed by the dealer group’s operational team to make sure the valeting across the entire group is at the level it should be.

Motorclean’s business has grown faster in the past 12 months than at any stage in its history, according to managing director Steve McBrierty.

The company has won more than £9 million in new business in the past 11 months and that figure is expected to reach £10m for the full year.

Motorclean works with more than 600 dealerships in the UK and has won 98 new accounts in the past 12 months. The company has a pool of 2,800 valeters across the UK.

McBrierty said: “We work with a number of the major dealer groups in the UK, so some of our growth has been due to those groups being acquisitive and our business naturally growing as a result of that.

“The second area that has helped us grow is having such a clear picture of what we want to be as a company. Those larger businesses that have a structured approach to procurement like what we’re doing and how we approach things.

“We’re prepared to invest in IT, infrastructure and our valeters and our partners are seeing that.”

“We’ve had unprecedented growth in new car sales and I think when that starts to slow down we will need to see how the industry reacts to that” Steve McBrierty, Motorclean

Motorclean’s core business is valeting, but its facilities management operation, cleaning and maintaining dealerships, has grown to be a £5m business. The company’s growth over the past year has also been boosted by its video and imaging service, which helps dealers to promote their vehicle stock.

Motorclean has also recently launched a new IT process for gathering feedback on how well it is performing for dealers. Account managers visit sites and can report on key performance indicators through an app on an iPad. This is then sent back to management at dealer groups to get a site-specific breakdown on how each centre is performing.

McBrierty said: “I think the big challenges coming up next year will be preparing for that inevitable drop in the market.

“We’ve had unprecedented growth in new car sales and I think when that starts to slow down we will need to see how the industry reacts.

“The second challenge is valeter supply. Recruiting quality candidates is a problem for the valeting industry and we want to make sure Motorclean is the first choice for anyone looking to get into this industry. We need to be providing the training and investment in people so we can attract people to the company.”

Family-owned Falcon has seen a 10% increase in its business over the past 12 months, winning contracts with dealer groups such as Peoples. To differentiate itself, Falcon likes to emphasise the fact that the management team all started out cleaning cars, working their way up to running the company.

It says this has helped to keep valeter turnover low and ground the company with an experienced operational team.

The company valets about 30,000 cars a week and has a team of 400 valeters that work nationally, from Falcon’s base in the North West, down the M6 corridor and into London.

Ian Rigby, Falcon’s managing director, said: “We are looking at expanding with another 30 to 40 dealerships soon.”

He attributes that growth to the fact that Falcon is a family-run business: “We’re nice to deal with. I know other companies may say the same thing, but it’s true.”

One of the biggest contributors to the company’s growth is its new events department, which can help dealers with events they are putting on.

The company also has a rapid response unit, which dealers can use to cope with sudden demand.

“In an ideal world, 24 hours’ notice is ideal, but sometimes that’s not possible. With rapid response, a dealer can increase the valeting team at very short notice for busy periods.”

Falcon also offers its valet smart IT system, which it says keeps the process “slick”. Dealers can access valet requests through an online portal, look at work in progress and manage bulk invoices.

Rigby said the business has also seen growth from its Serv+ programme.

“Dealerships using the programme can offer a premium wash and valet to customers from an optional menu and remove the free standard wash. Primarily, this generates additional income for dealerships and counteracts costs incurred for service washes.

“Some dealerships use the Serv+ another way and offer a discounted premium wash as a promotion and part-fund the wash as an extended loyalty deal with customers.”