Car dealers and CSI surveys – how much would you give them out of 10? 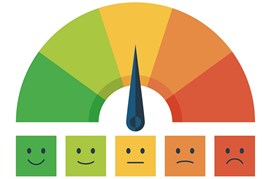 Customer satisfaction index (CSI) schemes are as entrenched in motor retail as volume targets and pre-registrations. And opinions on whether CSI has a positive or negative effect on dealerships can be just as divisive.

While it is safe to assume most businesses consider finding out what their customers think is useful, some industry experts argue that CSI scores are little more than a way for manufacturers to control dealer networks.

Professor Jim Saker, director of the Centre for Automotive Management at Loughborough University, said: “CSI programmes are a complete waste of time. The industry is wasting millions of pounds measuring dealers with something that doesn’t work.

“Satisfaction is a very weak emotion and I’m not sure what the purpose is, other than to reward or punish dealerships.”

Saker said he has seen manufacturer presentations that show a dealer whose CSI scores rose 8%, but their sales dropped by 5%. This compares with another dealer at the bottom of the CSI table, but with the highest customer retention out of the entire network.

Darren Williams, former owner of Grants Seat and now a consultant at Elements PRMC, said however cynical dealers may be about CSI, manufacturers believe it is the best way to get them to think about customer service.

However, he said when CSI is used as a way to penalise businesses financially, it can become a negative point of focus: “CSI has become one of the primary drivers of what you earn as a dealership. As soon as you make it about money, you’re driving behaviour with something that is not necessarily customer-focused. You are then looking to drive a result to deliver a specific number and there is a massive disconnect there.”

This point alludes to dealers chasing scores of nine, or 10, out of 10 to make sure the dealership will not be financially penalised.

Williams said poor CSI results can lead to manufacturers removing one percentage point from vehicle margins for the quarter. In an industry with an average return on sales of just 1.09%, this can mean a fine of about £30,000 for some dealerships.

Piers Trenear-Thomas, managing director of TT Automotive Consulting, said the financial value to dealers varies across franchises and even quarters, but it is substantial enough that “you cannot afford not to play the game”.

He said: “Manufacturers have latched on to research since the 1980s by the father of CSI, Noriaki Kano, around the fact that customer satisfaction is related to fulfilment.

“The more you please customers, the happier they will be. This has spawned the concept of customer delight, leading to customer loyalty, which, in turn, leads to profits.”

However, Trenear-Thomas said manufacturers fail to recognise one of Kano’s main elements – satisfaction is just the status quo and dissatisfaction is far more powerful.

He said: “If you go to a hotel and the sheets on the bed are crisp and clean, you are not delighted. All they have done is met your expectation.

“This means you need to do something thoughtful, personal and customised for each customer, to make them feel valued. Dealers have been forced into sending flowers or champagne to try to delight customers.

“The problem is, whatever you did the last time will just become expected, so it no longer delights the customer.”

Nigel Cook, the chief executive of customer experience consultancy Douglas Stafford, believes there is a link between customer satisfaction and loyalty.

His company works with dealerships and carmakers to measure CSI, as well as carry out mystery shops and “lost sale” interviews.

Cook said: “Dealers can be negative about CSI and I understand that. I think having the data from CSI surveys is one thing, but there has to be a clear objective.

“They can see where they might be going wrong, but they need a clear direction of how to fix the areas that might not be working.”

Cook said CSI surveys are not useful if they are viewed in isolation as a box-ticking exercise for the manufacturer. He believes CSI has to be integrated into what the dealership is doing around customer service as a whole.

David Baddeley, Volvo Car UK’s operations director, said: “I can see how if you had the choice you would rather no one had an overview of your business, but unfortunately that’s not how the franchised system works.”

Baddeley argued that CSI gives customers a genuine opportunity to say what they think in confidence, as they are unlikely to do so when face to face with the dealer.

He said: “Personally, I would rather have a league table of measures to give me some detailed insight before it gets to that ultimate measure, which is ‘will my business survive?’”

Baddeley said Volvo is in a good place with its CSI structure, where “a modest amount” of money is involved at a level where it can spotlight certain areas of the business.

Saker said dealers spend management time away from the business contacting customers to get a specific rating. He has been asked to give 10 out of 10 following a sale.

He said: “I’ve also had a letter explaining that due to a computer error only the ‘completely satisfied’ option would register as a response.”

Williams said dealers often make knee-jerk reaction to increase CSI scores if they start to drop, sending out sweets and champagne, but described this as ‘old hat’ now: “Customers see through the little gifts and I don’t think it works to help change the culture of the business that is causing the problem.”

He said: “A dealer wouldn’t mention it if they thought they had delivered a poor service.

“It would be a nonsense to ask a customer to rate them a nine or 10 if the dealer already knows the customer had a poor experience.”

Trenear-Thomas and Williams questioned how statistically robust CSI results are.

Trenear-Thomas said: “The sample sizes for feedback can be so small that a 98% is no different to a 58% rate because the pool of responses is so small.”

Williams gave an example of getting eight responses back from 60 sales. He said: “Suddenly if just one person is a detractor, you’re looking at a financial penalty. That’s why this is such a contentious issue.”

Cook said CSI scores have to be statistically robust before any feedback is given to dealers.

He said: “If you’re looking at 60 sales and only eight respond, then clearly that sample size is not big enough. You need to be looking at hundreds of responses, not tens.”

Cook said the industry is moving away from digital surveys, as phone conversations are better at getting specifics from customers to pass to dealerships. Trenear-Thomas and Saker agreed that comments from customers are a useful element of CSI.

Cook said: “It’s a lot easier to dismiss email surveys and people find it much quicker and easier to have a conversation on the phone. As a result, we have doubled our contact team in the last couple of years.”

Williams said good dealers take action and reflect on results, but the time between surveys going out and feedback returning to the dealership can often make it difficult to implement change quickly: “If customers from March were complaining about a specific thing within the valeting team, you’re already back-pedalling to sort an issue that may have continued into the next quarter while you were waiting for the feedback.”

Baddeley said manufacturers have to be there in a support role, rather than just measuring and stepping back.

He said: “Dealers are incredibly busy and they are spinning a lot of plates. The help has to be there for businesses.”

Saker said CSI programmes will have to change as new compensation models arrive.

He said: “BMW has already set a 30% target for online sales. As the relationship between manufacturers and dealers moves towards agency fees for test drives and handovers volume sales incentives, that could change how manufacturers measure dealers.

“Although when the industry moves across to an agency-style structure, this will also raise questions around who actually owns that customer relationship.”

Williams suggests one way forward would be to remove financial penalties for bad scores and replace them  with a performance review, where a collaborative monthly action plan could be put in place to improve.

He said: “I don’t think manufacturers have sufficient faith in their networks to do that. There’s too much fear that if they take away the penalty, dealers won’t have a vested interest in improving customer service.

“But if a dealer isn’t already invested in improving customer service, they will lose all their customers anyway, so it becomes a self-fulfilling prophecy.”