The differences between new and used car buyers 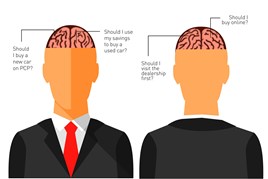 Predicting behaviour from buyers who conveniently fit a certain profile is somewhat of a pipedream in a fast-moving digital world where lines blur, overlap and conflict, making it increasingly difficult to differentiate between the used and new car buyer.

According to its Acorn consumer classifications (focused on ‘middle tier’ groups, where household incomes span £20,000 to £100,000) the ‘Executive Wealth’ group incorporates 15% of new car buyers, compared with 9.5% of used buyers. In the less affluent groups, ‘Modest Means’ has 7.6% new car buyers and 9.5% used and ‘Striving Families’ has 7.1% new car buyers and 10.5% used.

What do they buy?

Most buyers will not consider a car with more than 30,000 miles on the clock, while sat-nav, air conditioning and Bluetooth connectivity were the most important features. Most people initially enter a deposit of £1,000 and £200 was the favoured monthly budget. The most popular repayment term was 48 months, closely followed by 60 months.

How they buy is just as interesting. COG Research completed a study found car buyers fell into three behaviour segments.

‘Speedy choosers’ create a brief shortlist, decide on their car in under a month, and report higher satisfaction with their choice. ‘Benefit maximisers’ take longest to choose, do the most research and test driving, and are often least satisfied. The final group, ‘enthusiasts’, enjoy the process and are active in sharing information, but have a focused approach.

The study also found two in three were happy to make their decision after no or one test drive, late in the process. It suggests a robust qualification process, whether started online or in the showroom, will help sales executives to identify a customer’s type.

Simon Power, CACI’s principal consultant for automotive and media services, said: “The less affluent types were more likely to take up the dealer’s finance products. It’s a very interesting development. Dealers should be mindful that, as the finance regulations become stricter, it may affect car-buying behaviour particularly for A, B and C-segment cars.”

Motors.co.uk said monthly payment was the most prevalent feature of car searches for all buyers on the online classified network. Almost one fifth (19%) thought £200 was an appropriate monthly payment, 16% chose £150, while 12% sought cars at the £100 level.

Andrew Ballard, strategic director at Experian Automotive, said: “If it’s a monthly figure people have in mind when they begin research and then eventually make a purchase, the lines between new and used can become blurred.”

Codeweavers data revealed that from a sample of 430 finance applications and motor credit checks received in September, 100 were for used cars and 330 for new. Not surprisingly, the most popular finance product quoted on was new car PCP, with 317 applications.

Black Horse managing director Richard Jones said the trend was reflected at the lender: “Car finance remains much more popular for new cars (78%) than for used (under 30% in dealerships). We expect PCP usage to remain strong as consumers move from a traditional pay/own mindset to a pay/use preference. PCP has more opportunity to grow in used vehicle funding in particular.”

The Finance and Leasing Association’s figures back up these snapshots. In the year from August 2014 to August 2015, leasing among new car buyers grew by 53%; PCPs increased by 19%; hire purchase dropped by 8%; and personal loans grew by 4%. For the same period, used car buyers increasingly opted for PCPs with a growth of 34%; hire purchase agreements rose by 8%; but personal loans dropped by 23%.

CACI figures show 58% of new car buyers use a car as part-exchange in the purchase, whereas for used car buyers it is 43%. Part-exchange is also more prevalent among affluent groups.

GForces’ data showed that, in most cases, the cars being valued were the same model as the one being looked at, suggesting owners of older variants want to trade up to the newest version of that model.

The differences between new and used car buyers are blurring online, which often manifests itself in the dealership – a used buyer realises a new car is affordable or a new car buyer opts for a pre-registration or nearly new rather than wait for the new build time. Auto Trader’s insight director Nick King refers to this as a “window of opportunity”.

Auto Trader’s research shows 58% of car buyers consider multiple marques whether buying new or used and 29% would consider either a new or used car. Some 60% of buyers visit a dealership, with 34% saying this was a key part of their research.

King said: “Consumers are already searching for their next car according to how much they want to pay per month and when that becomes more prevalent, the distinction between making the decision to purchase a new or used car will lessen even more. Dealers can influence buyers to switch from one to the other, it can happen either way.”

While most consumers have yet to reach the stage when they are happy to buy a vehicle online, new car buyers are more likely to do so than used, according to a Codeweavers focus group.

Franchised dealers have a clear advantage – 70% of the group said they would have more confidence buying a new car online without seeing it rather than a used car.

Whether they are buying new or used, a prospective consumer’s online perception of a dealership must translate when they visit in person.

Motors.co.uk’s research among car owners identified a third (33%) bought their last vehicle because of price, while one fifth (21%) selected the dealership because it had the specific car they wanted.

Interestingly, 14% chose the  dealership because of a previous positive experience and 9% identified trust as a key factor.

Peter Watts, director of dealer insight, said: “Often, consumers will have conducted extensive research before they set foot in a dealership and, as a result, the role of the dealer is to validate the decision they have already made.

“In some cases, however, a rigid adherence to fixed sales processes can actually put the consumer off and potentially lead to a lost sale.”

MotoNovo Finance’s latest consumer feedback from more than 6,000 customers buying a used car in September 2015 highlights the importance of merchandising and customer experience activities in the decision-making process.

“It seems this total ‘holistic’ support is what is required to embrace the varying needs of a used car buying audience” Mark Standish, MotoNovo

Chief executive Mark Standish said: “It is clear that the showroom and forecourt experience have a real role to play as well. It seems this total ‘holistic’ support is what is required to embrace the varying needs of a used car buying audience that want information, reassurance and an engaging and enjoyable buying experience.”

With 50% of consumers waiting until halfway through their purchase journey before visiting a dealership, Kirk Franks, head of national sales at Alphera Financial Services UK, said: “There’s a small window to impress, when buyers visit the dealership towards the end of their purchase journey, so it’s vital to have well trained staff on site so all conversations with buyers are valuable and they get the information they need there and then to go ahead and make their purchase.”

Jones agreed: “Customers tend to limit their visits to a car dealership to when they are at an advanced stage in the process. It is therefore crucial that customers receive excellent service throughout the purchase journey – in the virtual and the physical showroom.”

Ballard added: “Skill and judgement by the dealer can help qualify what is important and guide them to alternative vehicles, or funding and ownership options. Expertise in this area is a clear requirement, but applying it to the wants and needs of car buyers is a key skill.”

While there is an inevitable price distinction between new and used car buyers, it seems the dealership experience is a key component for both, digital influences the decision to visit, but what happens on site can change a used buyer into a new and vice versa, and ultimately determines whether a sale takes place.