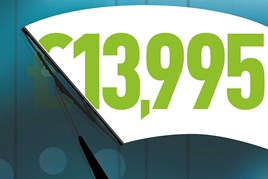 In the days when car listings appeared on paper and were paid for by the line, buyers had little to go on but a list of abbreviations and a price that gave no indication of whether or not it was “a good deal”.

Car buyers now come to showrooms armed with reams of information gleaned from online research, including on pricing and part-exchange values, but are they any closer to being sure that a price is fair?

To address this and to combat the traditionally low levels of consumer trust in used car dealers, some of the biggest players in the online classifieds industry have either introduced or are planning “transparent” price indicators.

■ CarGurus already labels dealer stock on its website according to whether it considers a price ‘great’, ‘good’, ‘fair’ or ‘bad’. (see panel, below).

■ Motors.co.uk is looking at launching its own version.

“I think making it easier to compare prices with the way we label stock won’t change the decision-making process for customers, but it will help speed that process up.”

Auto Trader determines the price label for each car based on make, model, derivative, age, mileage and any optional extras. This data is combined from more than 500,000 trade used car listings each day.

Nick King, Auto Trader insight director, said: “The internet and new technology has given consumers complete visibility of the market, and if the price of a car differs from what they’ve seen elsewhere, including your own website, not only will you lose a sale, but also your reputation.

“Those dealers that are going to be the most successful in 2017 are those that are pricing according to the live retail market, so being transparent, and those who are putting customers at the heart of their business.’’

CarGurus’ pricing system uses an algorithm to compare cars based on prices historically for models of a similar make, model, specification including options, mileage, accident history and geography. The price label is also weighted using the dealer’s reputation based on reviews held on CarGurus.

A race to the bottom?

Some dealers have expressed their concerns to AM that the new price labels will create a “race to the bottom”, with competitors looking to undercut each other and erode already thin used car margins.

However, he added: “If you’re pricing your stock at a good or fair level, there is still room for margin. If your pricing is fair or good, it doesn’t necessarily mean it will be the cheapest.

“Our pricing team will look at what the market is doing and there is competition to get on that first page and get to the top of results.”

Matt Thorpe, a consultant at independent internet marketing and e-commerce consultant Grasshopper, said aiming to provide the cheapest price online was not a sustainable strategy.

Thorpe said: “Due to the sheer volume of choice online, customers are now becoming less price-sensitive and more focused on areas like customer service, speed of delivery, quality of information, ease of communication, website usability and most importantly, how confident they feel.

He advised dealers to differentiate themselves if they are to succeed in the online marketplace in the long term.

“Price may be key at the lower end of the market but, at the middle or upper end, it it’s all about service and convenience,” said Thorpe.

Dermot Kelleher, director of marketing and business intelligence at Motors.co.uk, said the rise of online shopping had not seen consumers eschew premium retailers such as John Lewis in favour of the cheapest deal. He believes the decision-making process is more nuanced and balanced than simply being about price.

Karen Hilton, head of sales operations at Carwow, said giving car buyers the ability to compare and contrast in an unbiased way could actually boost the value of each transaction for dealers.

“Carwow data from 2016 showed consumers purchased 1.5 additional products with their car,” she said.

And Edwards-Smajda said pricing a vehicle too low may even put customers off: “Consumers see vehicle bargains as a risk.“

Smith said spec-adjusted pricing was the biggest hurdle for online classified providers to make a success of price indicators.

“The value represented by several thousand pounds worth of options can be difficult to get across to customers on the online portals at the moment,” he said.

Alistair Campbell, founder of Carsnip, the online car search engine, said the proliferation of options means there is more variation than ever.

“The key areas where pressure on fixed pricing is coming from is the drive to try to make sales transparent, but this is exactly at odds with the increased number of variable features on each car,” he said.

“Is a Mini Cooper with lane assist, sat-nav, leather seats, full franchise service history and new tyres worth less or more than the same car minus the lane assist, but with parking sensors and heated seats?

“For consumers willing to haggle, this variation is something they can try and use to leverage a discount, but for those not willing or unable, a fixed price model is extremely attractive.”

Imperial gets its spec data for vehicles from HPI Spec Check, but there is a cost associated with it per vehicle. Smith wants this data to be incorporated into the online classifieds portal feeds.

Campbell said: “Comparing like-for-like on price works for simpler cars, but gets harder the higher up the value chain you go.

“If we introduced price labelling, we would want to make sure we had at least 95% accuracy. I think that’s some way off.”

Auto Trader soft-launched its Price Indicator feature to dealers, before it goes live with consumers. The system is partly reliant on dealers uploading stock with the correct boxes ticked for options.

Edwards-Smajda said: “We have had a lot of feedback and we know we need to get the extra specification on vehicles spot-on before we can launch with consumers.”

Auto Trader also automatically pulls in the spec-adjusted data from details within a vehicle’s advert to help improve accuracy.

“If you’re saying something is a good or great price, you’re inferring other stock isn’t, so I don’t think there’s a lack of transparency if you’re not showing the bad deal,” he said.

“Having said that, CarGurus’ approach is also valid. If your stock is coming up as a bad deal, you’re probably not reacting to the market.”

Smith said price labelling has been a good benchmark tool that lets Imperial know if its pricing strategy is working.

He said: “If 75% of your stock is great or good, it gives you a chance to look at that 25% to ask whether prices need to be adjusted for those vehicles.”

Edwards-Smajda said there are currently no plans to incorporate customer reviews into rankings online, but customers on Auto Trader are free to look up reviews to compare.

Automotive retail is not the first market to be disrupted by the internet and it follows well documented upheavals in the air travel and hotel industries.

Langley Steinert, one of the founders of TripAdvisor, has taken his expertise from those markets and applied them to motor retail with CarGurus, which has been running for seven years in the US, where it is the biggest classified listing site, and landed in the UK in 2015.

He said: “We have seen the same sort of journey with CarGurus as with TripAdvisor, coming into the market focused on transparency on pricing and reputation.”

He said: “If you’re being transparent, it has to be unbiased.

“If you’re not publishing the badly priced vehicles or using a dealer’s reputation as part of the weighting to how they will rank, it’s not unbiased. I think consumers will see through that pretty quickly.”

He acknowledged that price labelling had generated concern about driving down prices.

However, he said: “If you’re using pricing tools and pricing at the right level, it’s not a race to the bottom, it’s a race to the market average.

“I would say 80% of the market is around that average, you’ll have 10% under and 10% over. If you’re pricing fairly, you don’t need to price at the lowest point in the market.”

He said CarGurus’ data shows 95% of leads in the UK for dealers were coming back from cars priced at fair, good or great.

Steinert also believes that the perception of “fairness” in transparent pricing will make haggling far less likely: “People are equipped with knowledge via a third party which reduces the need for haggling. We have found consumers don’t necessarily want a great deal, but they want a fair deal. If you are confident that a deal is fair then you are far less likely to talk about reducing the price. I don’t think it will be completely eliminated but it will be far less apparent.”