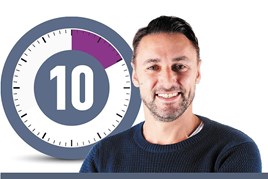 What have been the big milestones for you in the past 12 months? What are the next big developments?

We have been working much more closely with manufacturers. We have also expanded internationally and that is happening very rapidly. There has been a new relationship established with JLR that is pretty substantial.

We are working on advanced applications and we also have new business with Mazda. We are having a lot of interesting conversations with manufacturers and a lot of that is around direct online sales.

There is also a lot of work right now into how we can help bring online into the physical showroom, with pop-up showrooms and experience centres.

A lot of the previous work in this area has been very bespoke, one-off deployments, and we are looking at how the same platforms that are already being used online can transition into the physical space. This will be through consumer-facing tablets, screens and point-of-sale solutions. There are four pilot schemes running with four manufacturers for photorealistic 3D visualisers for configurators. A lot of stuff that has been done already in this space just doesn’t work outside a desktop and we have something that works really well on mobile.

We have doubled the amount of manufacturer business in the past 12 months and, at the rate things are going, we will do the same again this year. I don’t think we will see enormous growth from UK automotive retail. We have seen some consolidation and dealers looking at budgets, needing to do more with less. The big boys are getting bigger, hoovering up the smaller players.

The market conditions for UK retail aren’t great right now and I think Q4 isn’t going to be pretty. I don’t see manufacturers introducing any bullish plans in the short- to medium-term.

Our business is moving into France, Germany, the Netherlands, Australia and the Middle East. There has been enormous growth for us there.

It has been interesting seeing how far ahead and behind different markets are in terms of digital. The Dutch, for example, are much further ahead of the curve when it comes to things such as integration between customer data and DMS/CRM systems.

This global expansion has always been part of the plan. We always wanted to have software that was scalable enough to work across different territories. It has taken us a long time to get there, but we are in that position now. We were never going to just be a UK-centric, dealer-focused business.

Is integration and collaboration between suppliers and systems getting better?

Integration is still a massive problem across the industry. GForces has 90 direct integrations to offer technical support in things like DMS and CRM, but I’ve seen some providers talking in the trade press about how important it is to integrate with third-party suppliers and that stance is the exact opposite of what they have been saying and doing for many years now.

What do you see as the biggest threats to your business?

We are seeing some dealer groups looking to develop their own websites, their own software and their own DMS. That could be a threat to the company, but people think developing websites is simple. However, when you look at finance systems, data integration and applications it’s not as simple as they think.

This industry is pretty specialised and we have something to offer. Continued consolidation of the market means there are fewer dealer customers. There’s a greater focus from manufacturers to exert control to push to vanilla global platforms as well. You could look at Cox Automotive as perhaps our biggest competitor and they are buying everything that moves at the moment, but I think there are fewer and fewer real competitors for us right now.

What are the biggest threats to the franchised dealer model?

There are disruptors coming in, such as Carwow, and you could argue they are just doing what the dealers should have been doing anyway.

You are now in a situation where a lot of the full consumer data is no longer accessible to the dealer – it’s either with Carwow or at the manufacturer level. Manufacturers are much more aware of controlling that customer data.

Some may say footfall is picking back up, but I believe the physical showroom is simply not as important as it used to be. I have conversations with dealers and they still firmly believe in the validity of ‘gin palaces’, but if you look at the efficiency and yield from a showroom, it’s pretty poor.

Manufacturers want tighter control of brand messaging and they want to control that in the network before it becomes diluted. Manufacturers are looking at the internet as the biggest mechanism to take back control from dealers. Other than the US, where there are significant protections in place to protect retailers, the rest of the world is a big opportunity. There will continue to be some sort of partnership for dealers, but I think there will continue to be a move towards them acting more like agents.

I think an automated vehicle society and ‘mobility as a service’ (MaaS) will raise big question marks about how the retail and servicing model will fit in with that. But there’s also a bigger question mark on whether regulations would even let us get to that point. We’re still at the stage where planes have to take off and land manually, so who knows if we’ll ever get there.

I think the reduction in desirability of vehicle ownership is interesting, too. You can look at successful vehicles, such as the Toyota Prius and the Nissan Leaf. These are ugly cars. People are putting getting from A-B as a priority over any emotional connection to the spirit of motoring. Mass-market motoring was a post-war societal shift  but I think things are really changing. Just look at the drop in people taking the driving test in the UK. It’s fallen by 17.3% in the past eight years.

How well is the industry preparing for the General Data Protection Regulation (GDPR) next year?

We are ISO-accredited and we are working with other companies as a consultant to help them prepare ahead of the deadline in May 2018. If you look at how some businesses are currently set up and you apply the letter of the law for the GDPR as it stands now, you could drive a bus through how some companies are managing their data.

A lot of suppliers still haven’t given the GDPR a single thought. I’m not saying there will be a witch-hunt next year, but there may be some
consequences for that lack of preparation. Businesses need to be putting processes in place and it can be onerous. Currently, there are a lot of loose practices in the market and the data infrastructure of businesses has to be reorganised.

What sort of impact is Brexit having on the industry?

It just represents uncertainty. We’ve lost two contracts this year that were taken off the table simply because of Brexit. Any non-core investments were pulled and those nice-to-have projects start getting taken away.

From a negotiating perspective, how can we expect to get all the good parts of the EU and leave all the bad parts behind? If you’re talking broadly, it’s pretty clear businesses and car manufacturers don’t want this. Economically, there is great uncertainty and with that you will always get people withholding purchases for things like cars.

What are the big innovations you are excited about right now?

Technology has become democratised and that’s exciting. We’re all so exposed to technology and familiar with it and innovation is coming from all walks of life. We get a lot of great ideas from all levels of the business.

In terms of world-smashing, I think Tesla has to be up there in terms of ambition. Elon Musk is making
Rockefeller-esque moves and you have to admire the noise the company has made in such a short amount of time. Whether or not he can deliver the scale that is expected from the company is something else.

There’s a lot of cool stuff going on with artificial intelligence and automation internally, but I can’t talk too much about that at the moment. I think it’s also
interesting to see how quickly speech recognition assistant features like Alexa/Siri/Cortana/Google are becoming more refined.