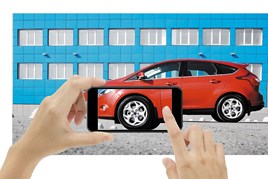 First impressions of a used vehicle are everything. In any online listing, if the images of a vehicle are not broad or comprehensive enough, prospective buyers will simply click on a different vehicle.

Many retailers have adopted a standardised approach, always taking the same handful of pictures from the same angles, with a system familiar enough to sales staff that any vehicle can be quickly processed.

Video should not be treated any differently. Adam Price, managing director and founder of AutosOnShow, said: “Just like your image set needs standards, your initial video should have standards that show enough to generate the interest.”

However, the consistency of videos in presenting used cars can vary considerably. Price’s experience is telling: “Dealers would do a full video walkaround: you had a big circle and you filmed the car in the centre of that circle. Then we found that customers didn’t have the room, so we then had a figure-eight walkaround, through the cabin. That kind of worked, but then customers were saying they could see too much of the
background and that they still didn’t have that much space on their lot.

“The standards varied from poor to just above poor. They might rush two thirds of the car in the first 10 seconds, and then you’d have 50 seconds of just ambling around. It didn’t look good for the customer.”

With this in mind, AutosOnShow developed a system that took the guided image process and, with a pause function, evolved it into a guided video system.

“It gives you a screen-in-screen guide that shows you, as you’re doing it, exactly what you should be doing and when. So you end up with a smooth, paused video that is blended together to give you a consistent 60-second view of any vehicle.”

Video in motor retail does not necessarily have to be all about the cars. Rather than extolling the virtues of their stock, dealers can use it to build awareness of themselves.

Robin Luscombe, managing director of Luscombe Motors, said: “One of the things about used cars is customers want to be able to trust where they’re buying it from. There’s got to be a degree of confidence.

“Video works better because it brings faces and personalities into play – it makes people realise that this is a dealership with a face and a human touch, and something that’s different.“

Building the familiarity before customers step through the door cannot be overplayed. It’s where social media comes into its own, of course. But that has its own peculiar requirements.

Luscombe added: “We do some brand stuff on social media where we try to be a bit more entertaining – if they’re going on social media they have to be entertaining. People watch the first three or four seconds on Facebook, and there’s no point making a two- or three-minute video if no one’s going to be watching.”

“We use video more for brand awareness, to get over the culture of the business, more than to sell a specific vehicle.

“One of the problems of doing a bespoke used car video is to get the quality good, if you’re doing a video for every used car. So we do an introduction video, with short extracts of customer testimonials for the trust and confidence. If someone makes an enquiry about that car, we do a video for that car and that person.”

With creative use of local landmarks, it’s possible to connect with buyers in a more personal way, too. Luscombe Motors recently experimented with a video superimposed over a digital billboard in central Leeds.

Luscombe said: “People locally know where the billboard is. Two of our members of staff said they didn’t even know we had a billboard, and if our own staff are thinking that…”

Opinion is somewhat divided on video in the workshop environment. Some feel technicians’ time is best spent with the vehicle rather than making videos. Lyn Howdon, the head of CitNow’s academy, could not disagree more.

“It gives customers peace of mind. Even if there’s nothing wrong with the car, a technician provides them a condition report on tyres and brakes to let them know that everything has been checked. Obviously if there is any red work that needs doing, we highlight the urgency of the repair to the customer on the day.”

CitNow believes video can allow the customer to make a personal connection with the person actually doing the work on the car. Their assurance that everything has been checked, and any remedial work noted and flagged, means customers are therefore more likely to authorise repairs.

Howdon said: “With our workshop application, it’s about the increased conversion of red work and amber work. Every dealer aftersales department is measured on the effectiveness of their red and amber work conversion. We have done studies that have taken data from dealers and manufacturers and looking at their rates prior to them having video and since having video – they have increased conversion as a result.”

This increased conversion offsets the time spent on the video and builds face-to-face trust in a traditionally less customer-facing environment.

A similar process can apply to bodywork repair. There are tight margins on these repairs, as bodyshop work is commonly paid for by insurance companies rather than customers. Howdon said: “We’ve got a bodyshop application that provides a condition report to the customer. This highlights any non-claim-related damage. With non-claim damage identified, the bodyshop can upsell retail work back to the customer.”

Ultimately, she said, it comes down to improving customer satisfaction, with customers who receive a condition report video scoring dealers higher than those who do not.

When it comes to used cars, customers have almost endless choice. If your stock does not engage with the buyer, they can head to any other number of alternative outlets – or private sales – instead.

Dominic Threlfall, managing director at Pebley Beach, said: “You’ve got to give the customer a reason to come and buy from you. If you’re looking at a three-year old car, you can go to a car supermarket, or a franchised dealer, or a back street garage. We’ve got to make the customer feel comfortable that we are completely honourable and trustworthy.”

An online enquiry is no less valid than a walk-in, so Pebley Beach gets its sales staff to send a 30-second personalised video for online leads. Threlfall continued: “When an enquiry comes in on a specific car, what we then ask the salespeople to do is just send a quick video email back. We have an app for it that’s part of the DMS system, so it all ties into the CRM process.

“You just say ‘Hi, my name’s Justin, and I’m having a quick walk around the car you’re interested in’. We try and get in there that we have been here for a long time, we have won numerous awards and so on. It’s ‘welcome to us’ stories, to set you apart from everybody else.”

Some scripting may be necessary, as there are points that need to be covered every time, but Threlfall cautioned against producing videos that are too generic.

“If it ends up being too scripted, it doesn’t come across naturally.

It has become such a part of the way used cars are sold that it now forms part of Pebley Beach’s interview process.

Threlfall said: “When people apply for jobs, we ask them to do a video email. If we’re asking our staff to do video to our customers, why wouldn’t you do a video interview? We want to see how they come across on the camera.”