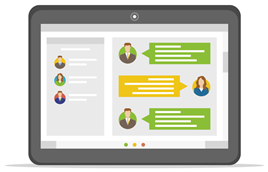 What is live chat?

Live chat software is a key part of modern retail, allowing consumers to interact directly with retailers, even outside of normal office hours. Large businesses, including Sky, Argos and Virgin Media, have been using the system for a while, and it is gaining popularity in the motor retail industry.

According to Ian Godbold, marketing director at Cambria
Automobiles, the system is an absolute necessity for the modern car dealer.

“I think you have to have this as a product for speaking to the consumer,” he said.

“Our dealers relish live chat, and if I were to take it away from them today, I don’t think I would be very popular.

“Without it, we wouldn’t be as far forward as we are today. We wouldn’t have so much insight about consumer behaviour on our website and I think our return on investment would be significantly lower.”

Jo McKeown, of live chat software provider Moneypenny, summed up the advantages: “Regardless of the time of day, encouraging site visitors to use live chat enables the team to pass on genuine, warm leads to the dealership, without breaking the customer’s interest.”

What car dealers should offer

Although it seems a simple idea, live chat systems come in a number of guises. From Facebook Messenger-style text-based chat to video and audio chat, there’s a plethora of options available for both customers and dealers.

Ed Parkinson, director of dealer development at Contact At Once, one of the world’s largest live chat providers, says messaging has taken over from phone calls.

“There has been a steady decline in phone calls over the last five years,” he said. “Messaging has taken its place. The increase in messaging communication has rapidly passed phone calls – especially in call-centre environments where people hate to be on hold.”

Priya Iyer, head of US-based live chat software provider Vee24, says it’s a case of horses for courses. In her experience, video chat systems lead the way, with consumers looking to buy a vehicle, while servicing needs are better served by a more traditional text-based service.

“I think video has a huge impact,” she said. “If you’re in a sales scenario and you’re selling high-ticket items like cars, then video is the way to go for the selling experience.

“The automotive industry does use text chat, but it’s more in a service scenario – ‘I’m a car owner, I want to bring in my car for service and I want a quick appointment’. Maybe I want to tell you something very quickly about what I want to get done in this service appointment. I might only use text chat for that and I’ll do it very efficiently. There’s a place for everything.”

“Early in the morning, perhaps when you’re on the commute – maybe on a train or a bus or something – you’re looking at data and you’re doing text chat, then when you’re on your lunch break you might be willing to put on your headset and listen to the agent.”

How to implement live chat in your car dealership

Worldwide, there are hundreds of companies that provide live chat software. Ed Parkinson, director of Contact At Once – reckons there are more than 30 such firms in the US alone.

However, while getting your hands on the software may be simple enough, staffing is another matter.

Iyer said dealerships with spare capacity or quiet periods can just use any existing dealer staff members with a little time on their hands.

“I think the beauty of this is you can drive traffic to different places based on where you have your resources available,” she said.

“It’s to create more traffic for the existing agents within the dealership, so we never recommend to dealerships that they need to add more people.”

However, she was clear that using an outsourced agency was a viable option for larger firms or those with less spare capacity.

Services such as that offered by Vee24, Iyer said, work well for larger dealer groups or manufacturers.

“We fill the top of the funnel for that customer,” she said. “We qualify those leads, make them more and more and more qualified and then hand them over to a dealership or a product expert.”

The two approaches are not mutually exclusive, though. Cambria Automobiles uses an overflow service based in the US, which provides responses when the company’s own team is busy.

According to Vee24, an increasing number of customers are conducting their online research not during office hours, but in the evening. In fact, the company reckons that almost half of all enquiries made on the Sytner Live Help service are made after the dealership has closed for the evening.

Iyer said: “The big peaks for online shopping happen between 6pm and 10pm. That’s a very big peak and often the dealership is not very heavily manned during those periods of time.”

Godbold agreed, saying many people shop online from home, and customers value a live chat service that operates until late.

“Customers want to engage after the dealership closes – between 8pm and 10pm is a very busy time – and between 8pm and 10pm they didn’t expect a response. Customers couldn’t believe that someone was answering the chat at that time in the evening, and that really helped with consumer engagement.”

Godbold’s method of staffing this 24/7 system is ingenious. Instead of using a British contact centre, he has taken advantage of time differences and used Contact At Once’s US offices.

“We wanted consumers to contact us any time, any place, making them feel valued, so we engaged with Contact At Once, and their in-office hours were our out-of-office hours,” he said.

Ensure you are getting value

As with all aspects of your business, it’s important to make sure your live chat system is providing good value. If it isn’t bringing in more money than it costs, then it is probably not worth doing.

Retail outlets across the world seem pretty unanimous that live chat is worth the investment, but for all the enthusiasm surrounding the technology, it’s clear that making the most of it requires hard work. And that is not just on the behalf of those who man the virtual phone lines or those who build the software, but also those who manage and monitor it.

McKeown thinks the use of analytics throughout the process means you can maximise your returns.

“Relevant dealership information is the key to success when it comes to managing chats for the automotive industry.

“The more detail they share, the better we can communicate with their web visitors, and ultimately turn more visitors into sales leads, sending valuable customer details straight into our clients’
CRM systems.”

Iyer is also focused on the user experience, but she believes that monitoring client satisfaction is key.

“Customer satisfaction is really, really important. That is an indicator of brand loyalty and future purchases, so we really measure that,” she said.

The future of live chat

Parkinson said text-based live chat is king, while messaging-based apps are the next big thing, with many users browsing on their smartphones and expecting
integrated live chat services.

Godbold described SMS-based live chat as the key “growth area” over the coming year or so.

“As we all know, mobile penetration is increasing,”
he said.

“But actually a live chat system on mobile is quite clunky, so we’ve implemented text-to-chat, where the consumer can begin a text conversation with one of our dealers, so the dealer can answer the question through a nice and easy-to-use system on a desktop or iPad or whatever, and the guest is texting via the mobile.”

Godbold said there are significant benefits.

“One, they’ve given you their mobile number. Secondly, the consumer can be on the move and begin a conversation, then come back seven days later and still be texting the dealership.”

AM Poll
Will e-scooters and micromobility reduce UK car ownership by 2030? Please leave a comment
Vote
View all
3212