What does the rest of 2018 hold for the used car market?

Many franchised dealers are concentrating on selling used vehicles in response to a slower new car market.

This is having the positive, knock-on effect of keeping the remarketing sector particularly competitive at a time of year that traditionally sees dealers preoccupied with new registrations. But will the strength of the market continue?

AM has asked market experts to break down current trends in the used car market and to look at what may be coming next.

Jayson Whittington, Glass’s chief car editor, said the wholesale used car market has been very strong so far in 2018, regardless of vehicle sector or fuel type.

He said: “There are, of course, cars that are looked at less favourably. Nearly new cars currently top that list, which is reflective of a new car market where discounting and well supported manufacturer finance incentives make buying new rather than used the sensible choice for consumers.”

When expressed as a percentage of cost when new, Glass’s average trade values (at three years and 60,000 miles) show supermini, lower medium and premium upper-medium segments share the same fuel trend, with petrol retaining slightly more value throughout the past 12 months, although there is no evidence of a slump in diesel values.

Diesel values took the upper hand for the majority of 2017 in the lifestyle SUV segment, although petrol has overtaken diesel more recently. 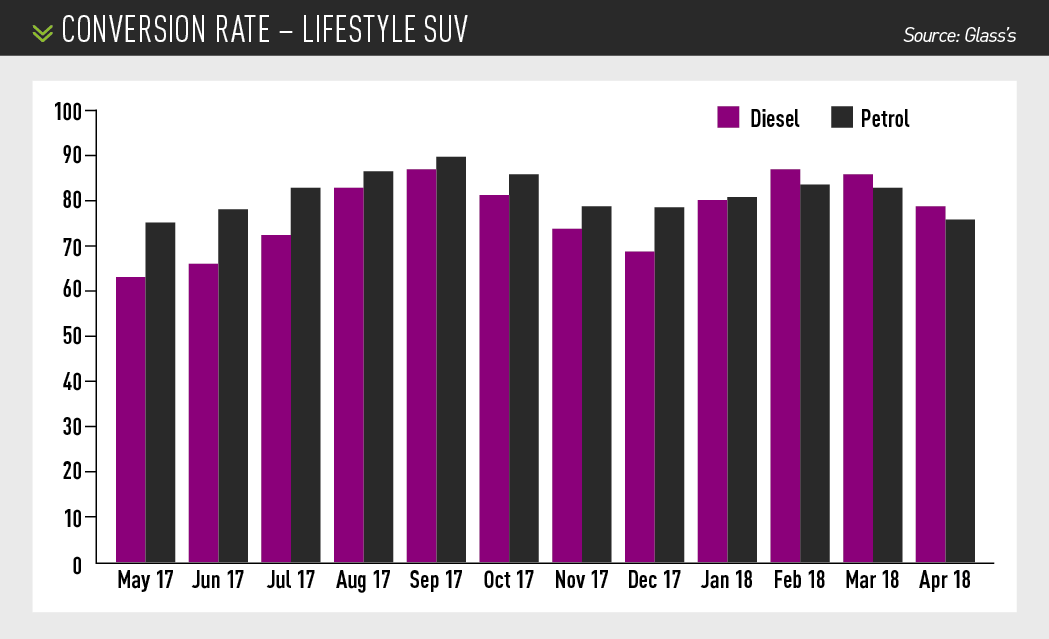 Rupert Pontin, Cazana’s director of valuations, said: “The strength of the used car market this year was particularly evident during April as used car stock supply reached the point where it was not keeping up with retail consumer demand.”

Pontin said: “The early part of May has seen greater corporate defleet activity and a consistent flow of part-exchanges.

“At the same time, the turn in the weather has mildly subdued retail demand and values are starting to stabilise in the wholesale market, although there is little evidence of that in the retail pricing.”

Looking across the different segments, one of the strongest performers had been city cars.

In April, however, city cars saw the largest decline of any volume sector – down 1.7% at the three-year point and 1.8% at one year.

Over the past year, some city cars have appreciated in value, but it appears they may have reached their peak.

SUVs remain the star performers across all sectors, accounting for almost one third of new cars registered.

Over the past 10 years, the volume of used SUVs within sold data analysed by Cap HPI increased sixfold and now makes up almost 20% of the data received. Derren Martin, the head of current valuations at Cap HPI, believes the trend will continue.

As is usual for this time of year, convertible prices are rising. Values increased in April by 0.7% at three years, 60,000 miles.

Glass’s data shows that in the supermini segment, petrol models have been converting at a slightly better rate than diesel, although the gap has narrowed more recently, which underlines the strength of the used market over the first four months of this year.

Volume cars from the lower medium segment, such as the Ford Focus, Vauxhall Astra and Volkswagen Golf, are displaying a similar pattern.

Diesel is still holding strong in the upper premium segment, due to the number of BMW 3 Series, Mercedes-Benz C-Class and Audi A4s that filter through from fleets, the majority of which still favour diesel.

Whittington said: “It is interesting to see that while petrol SUVs were converting at a better rate than diesel for much of the last 12 months, since January, diesel has taken the upper hand.

“It is believed that only around 25% of the total volume in the first four months were petrol models. The resurgence of diesel activity is not, therefore, due to a supply imbalance.

“It is worth remembering that there are no fiscal penalties to owning a used diesel. Recent activity reflects the public’s view on used diesel cars, which is they remain good value for money.”

The concern over the drop in new diesel car demand – year-on-year registrations were down 31.9% in the year to the end of April – has consistently been covered in the national press and it has been rumoured to be affecting the used car market too.

Pontin said: “There has been discussion in the wholesale environment of a reduction in used diesel values, although looking at the live retail valuation data this has not been the case from a consumer perspective and demand on the whole has been good.”

While Cazana’s data shows petrol values have increased by 14 percentage points in the past 12 months, diesel values have improved by just 7ppts.

Pontin said this change is to be expected bearing in mind the volume of diesel cars returning to the used car market and is not necessarily related to a reduction in demand, more that there is a greater supply.

“It is interesting to note that values from April 2017 dropped for one month as the press interest over diesel pollution impacted on retail consumer demand,” he said.

“However, as the year progressed, values improved. The decline during the winter months is as would be expected as the retail market quietened during the traditionally slower sales months of the year.”

However, Pontin said values have consistently increased in 2018 as stock has been behind retail demand, and values in May 2018 are actually higher than the same month in 2017.

Martin said even as new diesel registrations decline, consumers are displaying little or no resistance to buying a used car with a diesel engine. 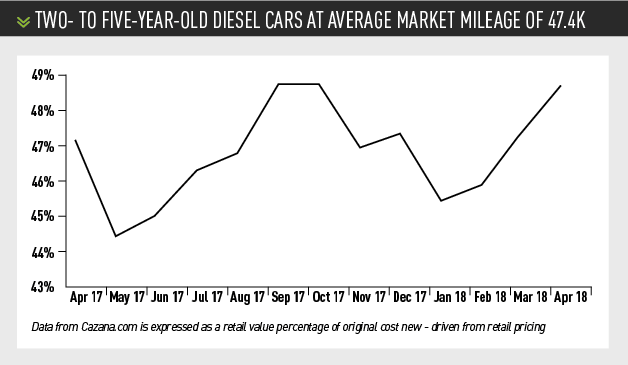 Martin said: “This is likely to be slightly more pronounced in May, but overall, used diesel demand has remained steady.

“As well as being strong in the upper medium sector, many SUV diesel values have either increased or stayed level, whereas their petrol counterparts have declined.”

Whittington said while it’s clear petrol has outperformed diesel, it has only been slight and there is no suggestion that diesel is underperforming.

He said: “Taking account of the volume on offer, diesel cars have performed consistently well.”

Values of hybrids declined more than other fuel-types in April because many models look expensive when compared to traditional petrol or diesels, and supply levels have increased. Models such as the Golf GTE and Audi A3 E-tron have recently entered the used market, creating more competition and pressure on prices.

EV values have been more mixed, and very much down to supply versus demand. Tesla Model S and e-Golf values have increased, while the BMW i3 now has increased used volumes available and values dropped by 3% during the month.

Market experts are predicting a robust used car market for the remainder of 2018 – and predict full-year sales will grow as high as 8.6 million, or 4.5% more than 2017.

Pontin said: “It will be important for the industry to watch certain market sectors for changes in both volume and values.

“Using live ‘big data’ to see what is happening in today’s environment will be key to maximising both retail profit and return on investment of the asset, ensuring risk is minimised.”

Whittington said he believed activity in wholesale channels will continue to be strong this year.

He said: “As in previous years, it is expected that the market will experience a lull throughout the summer months, as consumers’ attentions and finances are drawn elsewhere, like holidaying.

“However, trading conditions are expected to bounce back in August and September, with the rest of the year bringing buoyant activity and continued stability in wholesale channels.” 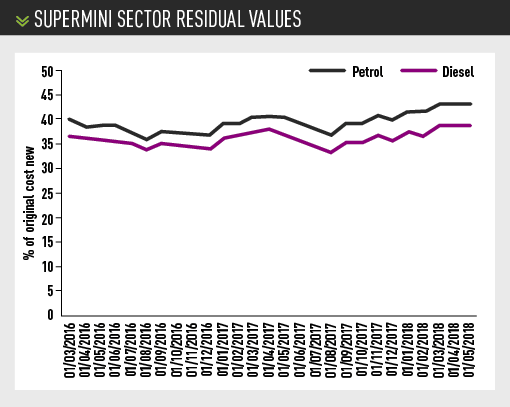 While Whittington acknowledged there has been a move away from diesel in the new car market, he does not believe this will have a detrimental impact on future diesel values.

He said: “Glass’s view is that there is no evidence of any significant weakening in the performance of used diesel and we expect to continue seeing strong used demand across the board, regardless of fuel type and segment.”

Martin said Cap HPI and the industry will be looking to see if diesel price movements will continue to outperform petrol and hybrid.

He said: “It would appear that petrol and hybrids have peaked, but with the proportion of used diesel supply high for some time yet, will demand match it?”

With new car registrations reduced, there will be a knock-on effect, with a drop in part-exchange levels.

Martin added: “As a result, we’re actually at a point where supply and demand are well matched. Used car finance is also more and more commonplace, with monthly payments becoming the norm. While all this is the case, values are still likely to drop away gently, as is the norm at this time of year.”