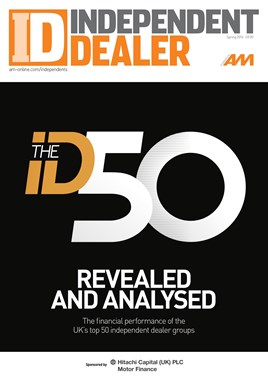 The strength of the UK’s largest independents in 2014 was reflected in the overall used car market, which reached an all-time high value of £45.1bn, according to the latest BCA Used Car Market Report, thanks to a 5.6%, or £2.4bn, year-on-year increase. A total of 7.2m used cars were sold in the UK that year.

Examining the turnover charts for the fastest-growing  independents year-on-year, there is a clear appetite for increased revenue among the top five of the ID50. Market leader Motorpoint, which has just announced it will raise £100m in an initial public offering, grew its revenues by £90m in 2014. It was the largest increase of any independent dealer, and pushed Motorpoint past the half-billion pound mark, putting more space between it and the second-largest independent dealer, Car Giant, which boosted its turnover by £70m to reach £465.9m.

Car Giant faces upheaval, however, as its current 43-acre  location in north-west London – the largest car supermarket in the world, according to Guinness World Records – is within an area designated by the London Mayor for regeneration. Car Giant has said that when the regeneration begins it will relocate the car supermarket to another site in West London and develop housing on its current location at Old Oak Common. It has already bought property in Park Royal.

Following Available Car’s mid-2013 takeover of the former Motorhouse2000 car supermarket in Cannock, a £52m leap in revenues has put it firmly into third place. It can be expected to grow just as strongly following the family-run group’s recent purchase of an 11.5-acre former Carcraft site near Leeds.

Fourth in the market, CarShop had a year of consolidation after rapid growth in 2013, growing annual turnover by just £2.2m in 2014. Its management team, led by Jonathan Dunkley, has not been focused on outright growth, but on improving profitability after two concurrent years of losses. 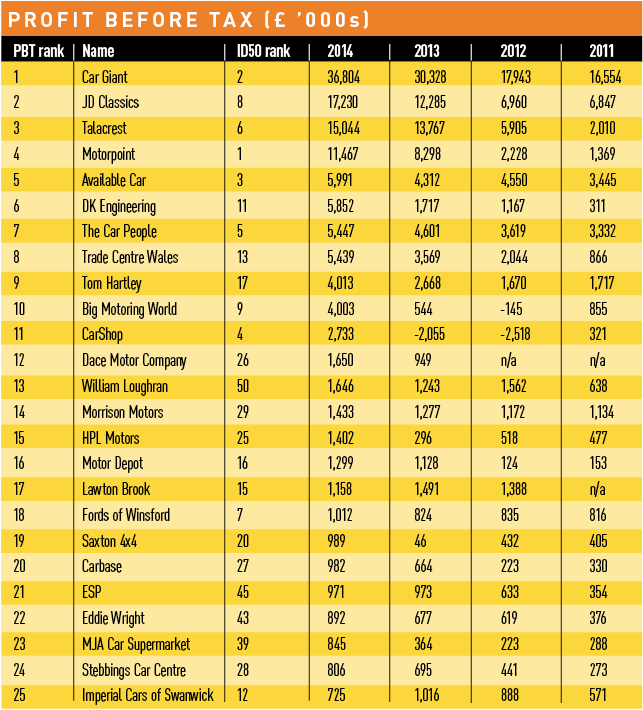 Growth was also relatively modest at The Car People, number five in the market, which increased turnover by £15.6m. Sales director Jonathan Allbones described its Wakefield branch as “at capacity”, but said an increase in revenues will come from its existing Sheffield and Ashton-under-Lyme sites and a fourth dealership – which will be its largest to date – due to be built in Warrington this year. (See our ID50 dealer spotlight on The Car People on pages 26-30.)

Big Motoring World in Kent has gained a place in the top 10 after a strong 2014, with turnover boosted by almost £39m. It claims to be the largest independent seller of BMWs, with more than 1,250 in stock at any time. Alongside its 800-unit West Malling prestige car supermarket, it also operates two dealerships under the Canterbury Motoring World brand, which sell other prestige marques and lower-priced volume cars, and a handover and service centre in Snodland. The group also operated a single bodyshop, branded Big Paint, but it ceased trading in 2015.

Chief executive Peter Waddell expects further growth, as West Malling is expanding its capacity to more than 1,000 units, so it can display more non-BMW prestige cars, and he aims to open at least one more site before 2019. Other recent developments include the creation of a call centre to capture customer leads and respond to enquiries more effectively, and extra emphasis on F&I sales, leading to a trebling of revenues from warranty and insurance sales.

Growth at Fords of Winsford has been limited by its reaching full capacity at its original 13-acre location in Cheshire – in 2014, it increased turnover by just £3.7m to £101.2m, maintaining its position as the UK’s seventh-largest independent dealer. However, it has since expanded into a second site opposite Manchester’s Trafford Centre, which was a former Carcraft operation.

The final used vehicle supermarket to feature in the top 10 of the ID50 is Car Select, the Midlands-based motor retail operation owned by Lex Autolease, a division of Lloyds banking group. Car Select sold selected ex-lease cars from Lex’s remarketing operation directly to the consumer. Having opened a second site in mid-2014 in Coventry, an hour’s drive from its Birmingham base, Car Select grew turnover to £95m in 2014. However, shortly before the ID50 was finalised, Lex Autolease announced its decision to close the business and commit to remarketing all its vehicles through auction group BCA. A Lex Autolease spokesman told ID it was a profitable, successful retail operation, but the group wants to focus on its core leasing operations. 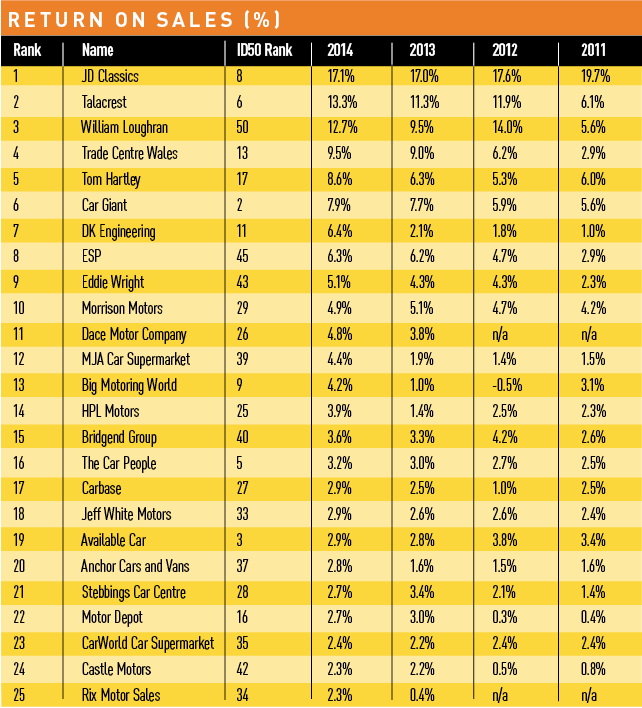 Broadly speaking, the returns being generated by the UK’s largest independent used car dealers have been stable at least, and improving for many.

It is perhaps little surprise that a number of the top-performing independent dealers for profitability belong to the supercar specialist club (see table below right). The best return-on-sales figure, 17.1%, was achieved by top 10 ID50 company JD Classics, which has put in a fairly consistent performance over the past four years and is considerably ahead of its peers Talacrest, with 13.3%, and William Loughran, with 12.7%. Unlike those peers, however, JD Classics’ returns ratio has diminished.

The supercar specialists also rule the roost in terms of profit per employee. This is to be expected, given that their business model is the opposite of ‘pile ‘em high, sell ‘em cheap’ model employed by volume retailers. Often headed by hands-on enthusiasts, the supercar specialists can operate with a small team and can extract from one car sale the equivalent profit of a dozen car deals in the mainstream market. 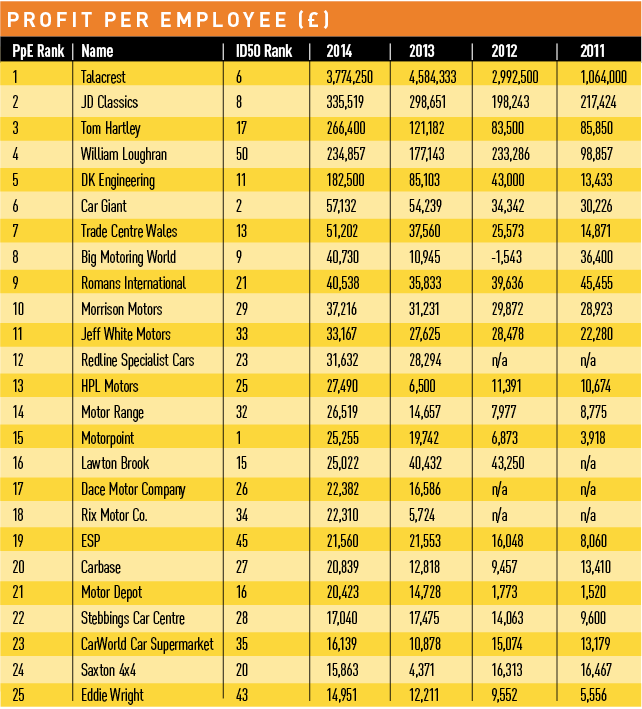 Talacrest, for example, had just four staff in 2014 and earned almost £3.8m profit for every one of them. Its rivals couldn’t come close, but were more than respectable: JD Classics achieved £335,519 profit per staff member and Tom Hartley and William Loughran both achieved more than £200,000.

The top-performing business among the used car supermarkets was The Trade Centre Wales, with a 9.5% return on sales, ahead of Car Giant with 7.9%. The Trade Centre Wales operates two car supermarkets in Wales – one nine-acre site at Neath retailing nearly-new and ex-fleet and a second at Merthyr Tydfil specialising in low-value part-exchange cars – plus its own online finance brokerage, Can Can Car Finance. It has been growing strongly, with revenues up from £32.9m in 2012 to £57m in 2014 and it will make considerably more progress once its third site, to the north of Cardiff, opens in spring 2016. It recently completed a £2.8m investment in a central PDI site with 32 ramps at Neath, in anticipation of group sales volumes almost doubling. 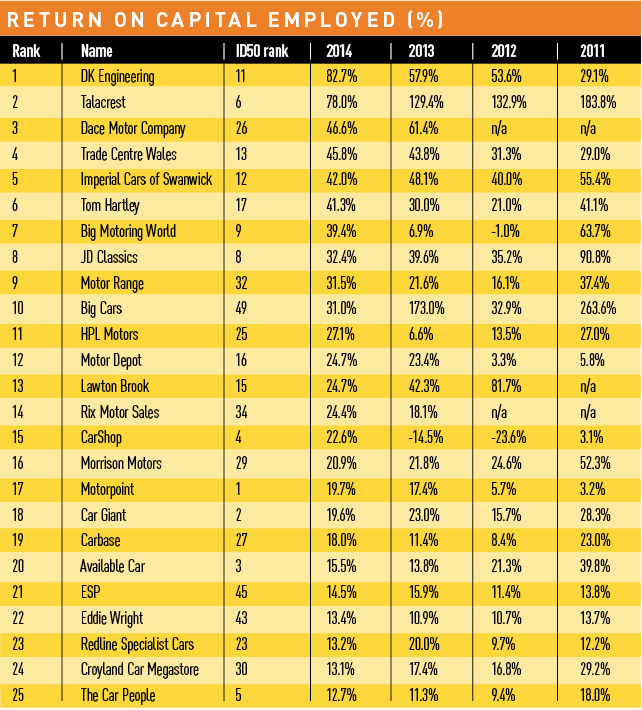 The Trade Centre Wales was also well ahead of Car Giant in terms of return on capital employed (RoCE – see table above right), with the former’s 45.8% ratio more than double the latter’s 19.6%. However, their positions were reversed when measured on profit per employee, with Car Giant ahead at an average £57,132 for each of its 644-strong workforce and Trade Centre Wales at £51,202 for each of its 109 staff.

In comparison, market leader Motorpoint achieved 2% return on sales and £25,255 profit per employee.

The ID50 grew profits by £40.6m in 2014, with most dealers boosting their earnings as consumer confidence continued to strengthen. Ten groups saw profitability decline, and two – Frosts and Unbeatable Car, both mainstream used car dealers operating in the South of England – posted losses for the year. In the case of Frosts, once a franchised dealer representing Vauxhall and Chevrolet, but now an independent used car dealer, it was the third year of rising losses despite a reduction and property sales.

On overall year-on-year growth in profit before tax, Car Giant was the victor, increasing by almost £6.5m to £36.8m in 2014. CarShop ended its loss-making period with a £4.8m recovery to finish £2.7m in the black, while Big Motoring World’s profits improved by £3.5m to reach £4m and Motorpoint’s earnings reached £11.5m after a £3.2m improvement. 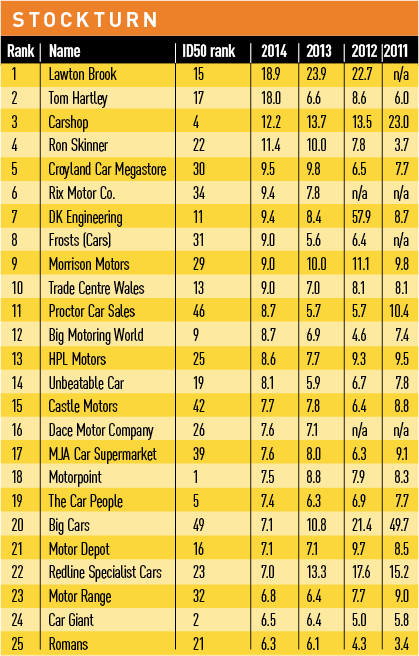 By calculating annual sales versus the inventory held in the independent dealers’ statutory accounts, we can get a guide to how regularly and profitably the ID50 companies are cycling through their car stocks.

Overall, the ID50 achieves an average annual stock turn of 3.8. The individual results are quite mixed, however and suggest that, even among the car supermarkets, few use high annual stock turn as a driver of their profitability.

Four of the eight independent dealers whose annual turnover exceeds the £100m mark feature in the top 25 performers for stock turn. Each appears to have a consistent performance too: since 2012, CarShop has turned its stock at least monthly, while Motorpoint, The Car People and Car Giant are consistently shifting stock between 45 and 60 days.

In future editions of the Independent Dealer ID50, we hope to provide deeper insight into the longer-term trends affecting the UK’s largest businesses committed to used car retailing. We welcome your feedback and suggestions on how we can make improvements – please email tim.rose@bauermedia.co.uk with your comments.