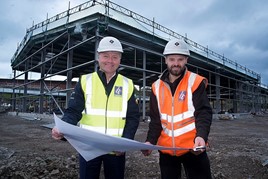 Hippo Motor Group is in the process of developing a £4m vehicle preparation centre before starting a £1m expansion of its prestige used car showroom in order to facilitate the business’ growth.

The Lancashire-based business, which made a 20th-placed debut into the ID50 2018 listing of the UK’s largest independent car retailers by turnover, hopes to grow its revenues from £61.6m to £70m with the help of the new developments.

Hippo, which operates from a showroom on Trident Way, Blackburn, also plans to grow its workforce from 160 to 200 next year.

The company, which 11 years ago sold 10 cars a month, now sells over 500 used prestige cars per month.

Managing director, Tom Preston, said: “We bought 10 acres of land from the council this year in order to forge ahead with plans to build this ground-breaking 40,000sq-ft vehicle preparation centre.

“We operate in a very competitive market, so it’s vital that we continually seek to invest in growing our offer and in doing so bringing investment and jobs to Lancashire.”

The development of Hippo’s new vehicle preparation centre is being completed by Barnfield Construction and, once completed, the facility will feature what Hippo claims will be “the UK’s first body shop to have a new fixed line system, 15-bay workshop, separate valet facility for up to 20 cars and a smart repair centre”.

Work is expected to be completed in March.

Preston added: “Once the build and fit is completed, we will then start work on extending our current showroom and offices in Trident Park, which will take a further six months and £1m investment to complete.”