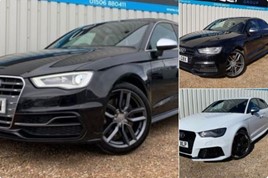 Three high performance Audi saloons worth £75,000 were stolen from a West Lothian car dealer in an overnight raid which left other vehicles and the property with “significant damage”.

West Lothian Police have appealed to the public in a bid to help them in their hunt for those who carried out the thefts from Calder Motor Company's Showroom, in East Calder, at some time between 1.30am and 6am on Tuesday (April 9).

Det Con Andrew Young, of Livingston’s Criminal Investigation Department, said: “This was a high value theft and we are eager to trace those responsible as soon as possible.

“I would ask anyone who was in the Camps Industrial Estate area in the early hours of Tuesday, April 9, and saw anything suspicious, to contact police at their earliest convenience.

“Likewise I would ask people to living in the wider West Lothian area to look at the images of these vehicles and if they do recognise them or know where they might be to get in touch with us immediately.”

West Lothian Police said in a stamen regarding the raid on the Calder Motor Company that “significant damage” had been caused to the property and other vehicles during the break-in.

Officers are appealing to the public for information and currently have no description of the suspects.

Those with information can contact Police Scotland on 101, quoting incident number 0634 of April 9, or anonymously via Crimestoppers on 0800 555 111.