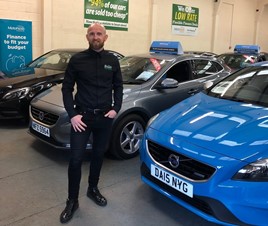 Independent used car supermarket owner James McConville has said that the search for larger premises is the biggest challenge he currently faces as he seeks expansion for his Solo Cars business.

McConville, who runs the Anfield-based business alongside his father and fellow director, Stephen McConville, told AM that finding a big site to expand to is “the only thing holding the business from being one of the biggest in the North-West”.

Solo Cars opened its doors in 2008 with just one members of staff but now employs 11 people and has reported soaring sales since 2017 – less than a decade after it was founded.

The business now stocks more than 100 premium-branded cars and sales rose by a third to 972 cars in 2018 as turnover reached £5.6 million.

Speaking to Liverpool Business News (LBN) McConville said that Solo Cars was currently fully self-funded but revealed that he is keen to deliver further growth after securing £800,000 in funding to finance the expansion.

“Our site is running at 100% capacity and the need for a new one is an everyday problem,” he said.

“Liverpool is a thriving city and, because of that, we can’t find the showroom we want or the correct site to build on. We thought we had site secured after two years of conversations with Liverpool City Council.

“But, at the last minute, they said they had other plans for the site under a larger scheme. It was a huge disappointment as we had spent several thousands of pounds preparing designs and plans.”

Solo Cars’ problem is a familiar one for the fast-expanding used car supermarket sector.

Imperial Cars, which set itself a target to expand from six in 2016 to 20 by 2020, adopted a policy of moving into former franchised sites to solve its premises problem to drive growth.

Imperial Cars director, Neil Smith, told AM: “Generally these sites allow us to display between 100 and 200 used cars. We started looking to these as a way to fill in the blanks across the country.

Among the sector's other car supermarket operators, Cartime and Synter Group's CarShop have both decided to redevelop supermarkets in their pursuit of new dealership locations.

McConville said that after a slow year in 2017 Solo Cars had seen the benefit of investment in its current showroom and the adoption of a new lead management system from Click Dealer.

“We also created a bespoke set of operational procedures, improved our stock profile to premium brands, developed our social media and lowered our finance rates to a flat rate of 3.5% which is totally unheard of in the motor industry,” he said.

The next step of the business’s growth has to involve more space for stock, he believes.