Was this article useful?
Click the thumbs up >
By his own admission, AM/Courland Rising Stars overall winner Ben Collins knew very little about the car industry when he joined his father’s company, Stephen James Group, in July 2001.

A graduate of Cambridge University, reading theology, Collins wanted to go his own way and joined a management consultancy. It didn’t work out, though, and he ended up at his father Duncan’s Enfield-based family business.

“I knew nothing about cars, but I looked after the Mini business which, to be honest, wasn’t a hard first year,” Collins says, referring to the fact that customer demand for Minis outstripped supply.

So how did the 28-year-old gain credibility and the respect of his work colleagues? “Hard work. It was never going to happen straight away but I set myself the objective of working harder than everyone else.”

A keen golfer, Collins also captained the cricket team at university and recognized the need to sharpen his leadership skills: “Being captain was a totally different type of leadership – this is much more complex.”

He formed a close alliance with the group’s human resources department. “They are fantastic and my closest ally,” he says.

#AM_ART_SPLIT# Collins, now group MD, was instrumental in developing a staff incentive scheme in 2004 where top performers from each department were taken on an all-expenses trip to an exotic location. Every member of staff, from receptionist to valeter to sales manager to dealer principal, had a realistic chance to win.

In a bid to combat sickness, one point was docked for each day taken off: sickness days have already dropped from more than 800 days per year to just over 300 – resulting in improved productivity.

Stephen James Group, formed in 1970, had never owned more than two sites. Collins changed all that. He spearheaded the move earlier this year to acquire three BMW and two Mini dealerships from Whitehouse Group.

“I found that my Oxbridge education had a novelty value in the motor trade, which helped to open doors with banks when it came to getting funding,” Collins says.

“The offer to buy the Whitehouse businesses came at the right time as I’d become managing director. I’m indebted to Jim O’Donnell for his support.”

Collins has a five-year plan to lead Stephen James Group into the AM100 top 20. That will require more than trebling its £150m turnover, and means he is keeping his eyes open for potential acquisition targets.

“We’ve always been involved with BMW and Mini. As we are going to embark on a long term growth strategy we’re looking to grow with those brands numerically, but in terms of achieving our future game plan we will have to encompass other prestige brands, too.”

Collins is also aware of the need to grow sales organically. He has identified a “massive used cars opportunity” and aims to double used car volumes at the Enfield business to 500 units within three years.

The business is investing in a 60,000sq ft combined used car operation and PDI centre, which will also free up more workshop hours for profitable retail work.

Collins adds: “In today’s marketplace it is right to be aggressive and have a policy of expansion and acquisition. With the major groups and plcs being so aggressive, you have to defend your position and build scale.”

"Ben is an inspired individual who is passionate about the business and focused on growth. He has already grown the business from one dealership by acquiring the BMW and Mini sites from Whitehouse – a significant investment for a young guy.

"He is seen by the carmaker as very much a rising star and he has a very strong set of values and a clearly defined management structure, which drives the business. He sums up everything we are looking for in a Rising Star." #AM_ART_SPLIT# ‘Be proud to be a winner’ 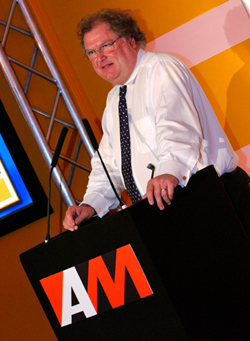 Sir Digby Jones, immediate past director-general of the Confederation of British Industry, told Rising Stars finalists that they were all winners.

“You are all to be congratulated,” he said. He also threw down a challenge to this year’s Rising Stars.

“Go to your local schools and tell the children about your industry. Share your knowledge, tell them you are a winner and be proud of it.”

Sir Digby added that true leaders have the confidence to surround themselves with people who are better at the job than they are.

With his new found freedom since leaving the CBI, Sir Digby sprinkled his speech with amusing anecdotes – most which will remain within the confines of the awards evening!

Judges’ comment
The judges were impressed with Nicola’s clear vision of HR as a strategic driver of business change, and her commitment to learning and development as a key tool in that process. For someone who only came to the industry 18 months ago, she also has a sound grasp of the issues facing the retail sector – a real fresh thinker.

Judges’ comment
The judges were impressed with Jay’s understanding of the broader industry strategic landscape. He is able to clearly articulate brand values in a business context.

Judges’ comment
Wayne brings a unique and highly effective style. He is a creative risk taker, who follows his own instinct, and an effective collaborator who embraces other functions within the business.

Judges’ comment
Chris showed enthusiasm, strong leadership and understanding of the strategic objectives his company is working towards. An all-round impressive individual.

Judges’ comment
Ben showed the most passion, the clearest vision, the strongest values and the greatest focus on profitable growth.