Infiniti has released new pictures and details of its fifth body-style for Europe, the G37 Convertible. 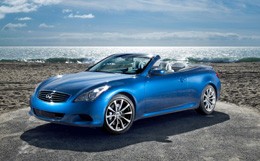 The G37 Convertible will go on sale across Europe next summer and like its coupe sister, is powered by the 318bhp 3.7-litre VQ-series V6 with VVEL.

The engine can be mated to an electronically controlled seven-speed automatic transmission with paddle shifters or a six-speed manual transmission.

More details about the G37 Convertible’s European technical specification, performance figures, equipment levels and pricing will be released closer to its on sale date next year.