Subaru looks to boost sales with new products in 2012 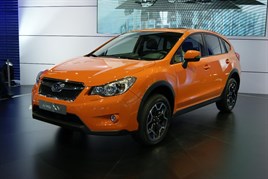 Darren James, Subaru UK’s new managing director expects sales to grow in the mid-term to around 7,000.

The brand is still looking to refocus the brand away from its performance orientated past to one that is more lifestyle focussed.

James notes that in 2003, around half of sales were for Impreza, a car for the enthusiast. Now the sales mix is better balanced and he expects that mix to become richer with the arrival next year of the XV compact crossover in March, followed by the BRZ coupé - developed in conjunction with Toyota - in mid-summer.

The importance of the XV and BRZ for Subaru is that they are expected to attract new customers to the brand. The XV, which is smaller than current Forester, could also woo previous-generation Forester owners, said Andy Masson, Subaru UK product manager.

The XV boasts the highest ground clearance and lowest centre of gravity of any compact crossover, according to Subaru's engineers, said Masson, while the interior "is the best we've ever had - a step change."