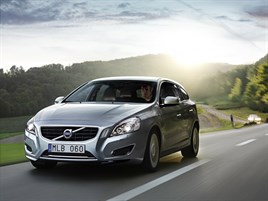 Volvo expects 80%of total sales will be in the form of company cars. The new car emits 49/g/km of CO2, can be driven on electric power for 32 miles and has a total range of 621 miles on a single tank.

The car comes with a five-cylinder 2.4-litre turbo diesel producing 215bhp combined with a 70bhp electric motor powered by a 11.2 kWh lithium-ion battery pack installed under the floor of the load compartment. It will be the first Volvo to include a D6 badge.

There will be a limited model year production run of 1,000 cars offered with Pure Limited specification, which includes the highest SE Lux trim level.

The V60 Plug-in Hybrid will be launched in just one colour - electric silver. Standard equipment includes 17-inch wheels, integrated exhaust tailpipes and a number of bodywork features in glossy black, such as the grille and the front spoiler.

The V60 Plug-in Hybrid can be recharged from a standard power outlet (230V/6A, 10A or 16A) at home or in a car park. Recharging time varies with amperage. A full charge with 10A takes 4.5 hours.

About 30% of total volume will go to Sweden and the other Nordic countries. Germany, Switzerland, Belgium, France, the Netherlands and the UK will have a share of between 5 and 15% each.

See AMTV for an interview with Volvo about the new V60 Plug-in Hybrid D6.

A full gallery featuring all images of the new model can be found in the gallery section of AM's website.