Infiniti has appointed Tony Lewis as its new regional director of Europe north following Angus Gray’s move to a role overseeing the growth of the network throughout Europe. 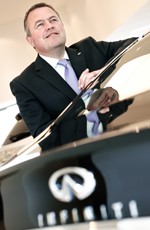 Lewis will be in charge of the UK network and moves to Infiniti from Nissan where he was director of sales and marketing for light commercial vehicles at Nissan Europe, which he joined in February this year. Lewis was previously Nissan GB’s corporate sales director.

Infiniti said Lewis will play a key role as Infiniti moves into its second phase of its UK launch, seeking to expand its network coverage across the region following the Japanese performance brand’s debut in late 2009.

Lewis said: “We have to put tough economic times behind us and ensure we capitalise on all the good work and really start to make an impact in the UK market.

“Everything is in place for that to happen – from Infiniti centres to our partnership with Formula One World Champions Red Bull Racing to our expanding range of performance cars, which I’ve wasted little time in getting to know.

“To be involved with Infiniti at such a dynamic time in its European development is an amazing opportunity.”

Reporting to Infiniti Europe commercial director Guillaume Pelletreau, Lewis will be responsible for driving the sales of the expanding Infiniti line-up, focusing on key northern European markets such as the UK.

Currently four Infiniti dealerships are open in the UK with another two, in Leeds and Stockport, set to open later this year. More are planned for 2012. A further key mission for Lewis will be to drive the expansion of the network in other northern European markets.