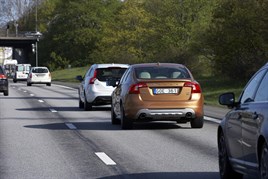 Volvo is looking to launch new technology that automatically steers and follows the vehicle in front on motorway driving in slow-moving queues up to 30mph by 2014.

The Swedish manufacturer believes the technology makes driving more relaxed in the kind of monotonous queuing that is a less attractive part of daily driving in urban areas.

The traffic jam assistance function is an evolution of the current Adaptive Cruise Control and Lane Keeping Aid technology, which was introduced on the new V40 earlier this year.

The driver activates the traffic jam assistance function by pushing a button. When active, the engine, brakes and steering respond automatically.

Mertens said: “The car follows the vehicle in front in the same lane. However, it is always the driver who is in charge. He or she can take back control of the car at any time.

"Our aim with the traffic jam assistance is to make commuting a bit less stressful for the driver.”

Volvo wants to be a leader in the autonomous driving and it focussing on moving beyond concepts and pioneering technologies to reach actual customers.

The brand has already demonstrated the SARTRE project (Safe Road Trains for the Environment), which focuses on platooning in highway and motorway traffic at speeds of up to 56mph.