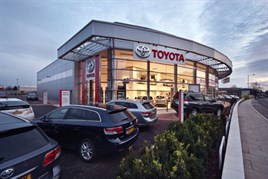 Japanese industry taught the rest of the world how to build cars properly and now wants to do the same with how they are sold.

The Toyota Tsusho Corporation automotive division’s aim is “to be the world’s strongest automobile sales group”.

TTC’s first overseas investment was in a distributor in Ecuador in 1964 – the first in a Toyota dealership was in Brazil in 1990.

In addition to Jemca Car Group in the UK it extends to other European countries, and across the Middle East to Africa and Australia, Central and South America.

He is responsible for getting the money needed to develop Jemca and then reporting on performance.
Ito works closely with vice- president David Collis, the executive responsible for how Jemca generates the profits to justify investment.

Jemca needs to be seen to be fulfilling the TTC philosophy of “turning a one-time buyer into a lifetime customer”.

It is the retail equivalent of Japan’s car-building dedication to ‘right first time’ that leads to mechanical reliability and customer satisfaction.

To make retailing work the TTC way requires recruiting the right people and operating a database that enables them to keep in contact with Jemca Car Group’s 76,444 customers.