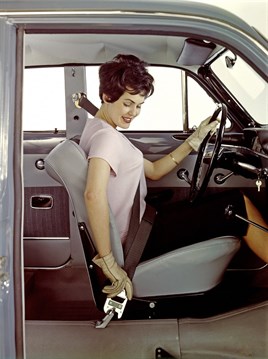 Volvo believes its Vision 2020 will see it develop a new car which cannot kill or seriously injure occupants or pedestrians within the next seven years.

However, following a study from Volvo 60% of UK drivers don't believe safety innovations can wipe out road traffic accidents in the near future.

The studdy by Volvo follows the 30th anniversary since the introduction of the mandatory seatbelt.

The seatbelt law came into force on the January 31, 1983 and it has been estimated this legislation has saved over 60,000 lives over that period.

• Many would welcome a range of safety innovations on vehicles with over a quarter saying they would like a car that drives itself
• More than half would be happy to be driven by autopilot
• 45% would like to see pedestrian protection technology on all cars
• Over half want all round cameras fitted to vehicles
• Interestingly, only a third of drivers believe speed limits on motorways should be increased because of these improved safety features

Volvo Car UK's managing director Nick Connor said: "As a nation of sceptics, it is perhaps not surprising the majority of British motorists think the introduction of vehicles which make accidents virtually a thing of the past is not possible but I have every faith in Volvo to prove them wrong.”

Volvo first introduced the two point cross-chest belt as an accessory in 1956 followed by the 3-point belt in the front as standard equipment in 1959.

Three decades of research and development means predictions of auto-piloted, self-driving, crash-proof cars on our roads by 2020 may not be all that farfetched despite the doubts of the majority of motorists surveyed.