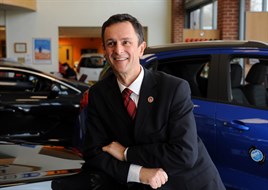 Leading from the front seems to come naturally for Graham Jacobs.

As the second generation in his family to head Vauxhall dealer group Picador, he welcomes the responsibility to motivate his dealership teams into delivering the best for his customers.

Occasionally, this will include “camp lessons”, as he puts it, to remind members of staff that customers need to be put at ease. Jacobs explained: “I have got really good guys, very knowledgeable, really into their cars and really nice chaps, but they look a bit miserable sometimes, so I give them camp lessons.

“So I will stand in front of them during a morning perhaps, I just say, ‘look at you! If I was an old Doris wandering in here, I would be terrified to say something to you lot.  Put a hand on your hip, smile a bit more, just think a bit more like this.’

"They look at me as if I am going mad but you can’t help but smile and you can’t help, but think, what Graham is saying is right.

“They are intimidating places to come into, aren’t they, car dealerships?  Really intimidating. So my advice is always give camp lessons. They look at me and think, ‘oh for Christ’s sake, what is he on about now?’

"But they don’t mind it really because what I say is: ‘boys, look I know that you are really nice blokes, every one of you.  You are great and you have been so helpful to me over the years. But customers don’t know that – it is the way you are perceived so put a smile in your voice, smile before you dial’.”

If employees aren’t willing to put on that smile, Picador is not the workplace for them.

It’s a constant message from Jacobs, the CEO, and his managing director Robert Oakeley.

Jacobs spends half his week out at his dealerships for departmental meetings or even just passing on messages and ‘touching base’, to ensure the company philosophy – be friendly and people will buy from you – is maintained.

Picador has represented Vauxhall in Southampton since the days when Jacobs’ father Lionel, still chairman, joined as head mechanic in the early 1960s and then bought it in 1966 from owner Reg Haines.

Jacobs remembers his parents sold everything they had, including their house, to fund it, and moved into the flat above the showroom.

His childhood bedroom long since has become his office. Jacobs joined the family business in 1981, when its annual volume was around 80 units.

Expansion with Vauxhall into Chandlers Ford, Winchester and, with an acquisition of Pat’s Garages a year ago, into Lyndhurst, has seen its volume increase 10 fold.

Picador owns the Southampton and Chandlers Ford properties, aims to buy the freehold at Lyndhurst and is early into a 25 year lease at Winchester.

It took on Southampton’s Chevrolet franchise in 2008 after previous franchisee Denkale was terminated by General Motors UK.

Although Picador negotiated a rent reduction and had some GMUK support, when the lease expired on that showroom in 2012 Picador was unable to find an affordable new home for it in the city.
It’s a closure Jacobs would like to have prevented, as he rates the Chevrolet brand and would like to represent it again in future.

The group has just bought a piece of land beside its Southampton Vauxhall dealership to allow for expansion of the showroom, but Jacobs hopes it could also accommodate a new-build showroom for a second franchise – he’s open to discussions with any brand.