Budget priced sports car due to enter market this year 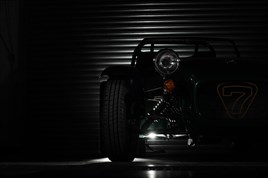 Caterham Cars will release a new, affordable entry-level version of the iconic Seven that harks back to the philosophy that inspired its creation.

The car will come with an accessible price tag at under £17,000 and will pay homage to the brand’s engineering DNA of ‘adding lightness’, with a super-compact, flexible and EU6-compliant engine.

As Caterham celebrates 40 years of developing and manufacturing the Seven, the new car will take the brand back to its simple design roots but remain entirely true to Caterham’s mantra of delivering “accessible fun”.

The as-yet unnamed car will be launched in Autumn this year, with first deliveries expected before the end of 2013.

Caterham Cars chief executive Graham Macdonald said: “As we celebrate our 40th anniversary at Caterham, it feels good to be taking the brand right back to where it started.

"Colin Chapman designed the original Seven to be entirely ‘fit-for-purpose’ – a racing car for the road with the driving experience at its heart.

“With that in mind, the new entry-level Seven will be uncomplicated, easy to run and, most important of all, an intuitive and exciting drive.”

With Caterham’s minimalist DNA being applied to every aspect of the new Seven, including the engine, the car also stands a good chance of being the most fuel-efficient Seven ever built.

Details of the powertrain, which is being developed in conjunction with the Caterham Group’s engineering consultancy, Caterham Technology & Innovation, will be revealed in due course, along with further specification details.