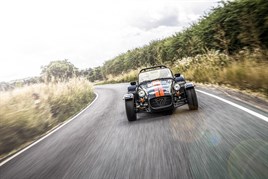 Caterham Cars has appointed Revolutions in Perth to provide new, used and servicing for its Seven model.

Revolutions is also a main dealer for Morgan.

Caterham has two other UK showrooms – its main dealership and sales headquarters recently moved from Caterham, Surrey to a new site in Crawley, West Sussex and its Caterham Midlands dealership in Earl Shilton, Leicestershire.

Graham Macdonald, CEO of Caterham Cars, said: “It is a great feeling to be bringing Caterham Cars to Scotland – partly because it’s where I hail from, but also because it makes good business sense too; we know there is demand from sportscar enthusiasts in Scotland.

“Revolutions is a very experienced outfit, but is also brilliantly-located near some wonderfully picturesque driving roads – exactly the sort that seem designed specifically for the Seven. On top of that, customers won’t have to travel so far for maintenance, a test drive or to place an order.”

Caterham recently announced ambitious new model plans to expand beyond the niche track focussed sports products it is known for, with intentions to launch a crossover and small car model in the future.