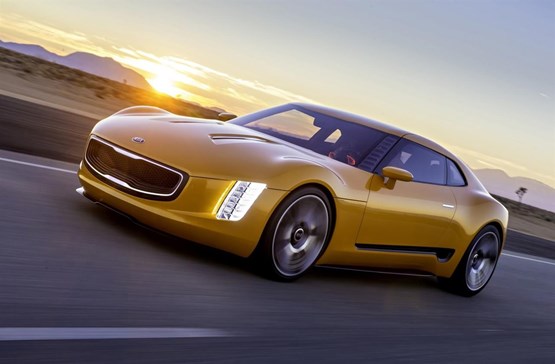 Kia has revealed more information and pictures of its GT4 Stinger rear-wheel drive concept at the Detroit Motor Show.

The new model would be a rival to cars like the Toyota GT86, Subaru BRZ and Mazda MX-5.

The South Korean brand is expected to launch a rear-wheel drive sports car by 2016.

The Stinger’s designer, Tom Kearns, said: “We would love this to be and we wouldn't change anything.

"It is a total concept at this stage, but we always do our concepts with the idea at the back of our minds that we could do them without too much change. We have rear-drive platforms in the group that we could use."

The concept car is fibreglass-bodied, but it does drive and went around a Californian test facility under its own steam for the promotional video to accompany its unveiling in Detroit.

It has see-through windscreen pillars which at this stage Kearns is not sure are feasible for production, and a deliberately simple interior to try to bring back the connection between driver and car.

Simplicity was emphasised during the design process, with each member of the team given one sheet of paper and told to produce a design accompanied by just one main title and strapline, rather like a movie poster.

The Stinger is a two-door two-plus-two coupe powered by a 315bhp version of the company's 2.0-litre T-GDi direct-injection turbo engine, driving the rear wheels through a close-ratio six-speed manual gearbox.

Tom Loveless, the executive vice-president of sales for Kia North America, says it eschews the "laundry list of electronic driver aids" which blunt the driving enjoyment of some sports cars.

Kearns said: “If we build it, it should be something people are going to be able to afford - under $30,000.

"We have already shown that we can make luxury cars which are still value-oriented and we can do the same with a sports car."