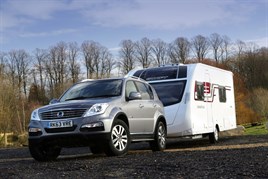 The brand had been without the Rexton, a large 4x4 model well known to SsangYong buyers since 2003, for the past 18 months as it awaited the new version.

Gray said customers for the Rexton are typically aged 60+ with hobbies such as caravanning.

The seven-seat SUV is positioned to appeal to caravanners who in the past owned large 4x4s such as the Hyundai Santa Fe or Terracan, or second-hand Land Rover Discoveries and Mitsubishi Shoguns.

In response to recent reports that SsangYong’s owner Mahindra & Mahindra is considering whether to rename the car brand, Gray said existing customers have positive connotations with the brand and do not consider it has having ‘baggage’.

He admitted that new prospects generally haven’t heard of the brand but said dealers can engage and reassure them that it is a brand from the same nation as Kia and Hyundai with the investment from India’s M&M.

Coinciding with a facelifted Korando compact crossover, the Rexton is SsangYong’s latest new launch since it introduced the Turismo last year.

The Turismo, a replacement for the Rodius, is a 5.1-metre long seven-seat MPV with heaps of load space and 4x4 ability in top trim. It’s a niche vehicle that caters for the large families or minicab operators who can’t follow the down-sizing trend, Gray admitted.