Bedfordia exits market with sale of sites to Group 1 Automotive 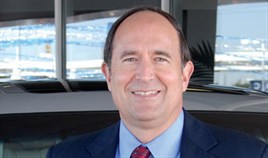 The dealerships will continue to operate as Elms Bedford BMW/Mini, Elms Cambridge BMW/Mini and Elms Stansted BMW/Mini, and are expected to generate £143 million in estimated annual revenues. Based on 2013 accounts, the acquisitions brings Group 1's turnover to £695m.

“We are pleased to expand our relationship with BMW UK and further leverage our scale and excellent management team in the UK,” said Earl J. Hesterberg, Group 1’s president and chief executive officer (pictured).

Group 1 has had the BMW and Mini franchises since 2007.

"We have a proven track record of performing well with BMW, demonstrated in our Barons and Chandlers operations," said Ian Twinley, Group 1 regional vice-president, who runs the UK retail business. "We satisfy its goals for customer service and satisfaction based on the customer experience levels expected by BMW. Group 1 also has a stable management team in each of the centres, which means a lot to BMW."

The company’s UK operations are expected to generate approximately £826m in estimated annual revenues with the addition of these sites, which will continue to operate under the Elms trading title. The deal also includes aftersales and service centres in Bedford operating under the Myltons brand.

"Culturally, there is a great deal of similarity with the Elms businesses," said Twinley. "Group 1 was formed from a number of private businesses that consolidated, but retained its family values. Group 1 has accounting practise differences and probably has a greater sense of urgency in what we do, but at our core we have the same values as Elms."

Twinley said Group 1 was prepared to make further acquisitions that fit geographic and brand criteria. A recovery in financial performance and commercial property values in the UK, he believed, would prompt more business owners to sell up in 2015.

Facilitating the deal were directors Paul Burrows and Steve White from Grant Thornton.

Burrows, head of its downstream automotive M&A activity, said: “The latest deal in the premium brand space illustrates the appetite that exists for acquisitions within the motor retail market.

"Bedfordia, trading as Elms, has been a proud representative of the BMW and Mini brands for a number of year, culminating in their investment in the flagship Cambourne location.

"We expect more activity in 2015 and feel that owners who are faced with increasing investment commitments and better funded competition will seek to take advantage of the buoyant market."

More activity is expected at the smaller group level and with brand competition to secure volume at a high point, there is every reason to see 2015 as a further year of change, he said.

The deal spells the end of new car retailing for Bedfordia. It is understood that director and shareholder John Ibbett has chosen to concentrate on other interests in the Bedfordia Group: agriculture, eco-technology and property.

Bedfordia Automotive managing director Niall Hooper has stepped down. A total of 282 Elms' staff have transferred to Group 1.