Dealer numbers in Europe have significantly fallen as a consequence of the recession - and to the benefit of manufacturers. But it has been at reduced level to that of car sales over the same time period. 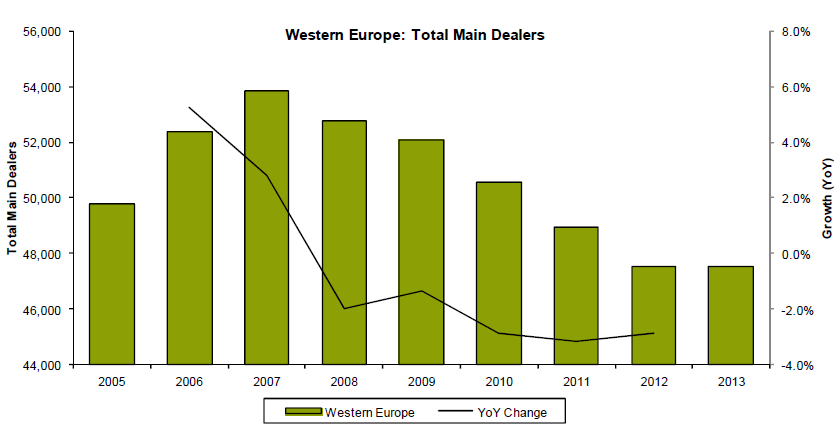 The report from Bernstein Research, entitled 'Euro Autos: the lost continent - how have dealer network been hurt by Europe's car slump sales?' says: "It's almost certainly in the interests of the OEMs to have fewer dealers in Europe – and the recession has allowed progress in that direction, despite the surprising resilience of many operators.

"It's been partly OEM-led, but mainly a function of economic necessity, with dealers going bust.

"Whether the right dealers leave the business or not is unclear, but a general slimming down of the network is probably a good thing. (Data) shows some OEMs have reduced dealer numbers very little despite plummeting sales (Fiat has cut its network by only 6% since 2007 and PSA has cut by only 7%, despite tumbling new car sales).

"Mercedes appears actually to have increased its dealer count. By contrast, Renault has cut by 15% (but has seen sales fall hard too), BMW has cut by 13% (despite sales that have been tremendously resilient in the crisis) and VW has cut dealer numbers by 10% (also during a period of market share gains for VW, at least until recently).

The consequence of these disparate trends is that VW now appears to have the most 'efficient' dealer network in Europe and PSA the least.

"The dealer count in western Europe has contracted significantly compared to pre-recession levels.

The strength of used car sales and aftersales had prevented, the report, says further closures.

"Alternative sources of revenue (and, most importantly, profitability) such as finance, insurance, repairs and maintenance (after-sales and parts) as well as better (when compared to new car sales) margins on used car transactions have helped sustain dealers
through a lean period where new volumes have remained sluggish," the report says. 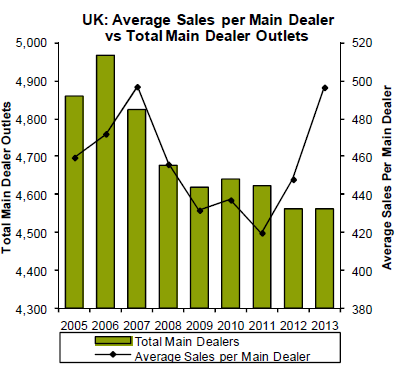 The breakeven point for a dealership is 150 car sales a year, according to the International Car Distribution Programme provided the data.

In a special report written for AM, Steve Young, ICDP managing director, said: "The need to adapt networks for the digital age and at the same time fix the broken financial model that has crippled many dealers across Europe is now recognised by many.

"Manufacturers at the headquarters level are preparing plans that will see the addition of new digital capabilities, greater involvement of manufacturers in retail interactions, new requirements on dealers – and a reduction of 25% or more in the number sales points.

"In some markets, dealer associations are pushing manufacturers to work together on these plans as they can see that the need for change is urgent.

"And in other cases, the plans are already out in the open, with the Volkswagen network in Belgium now started on a five year rationalisation process which will reduce investors and sales points."

> Young's article, 'Five things a dealer should be doing now to prepare for 2020' is included in The 2015 UK Franchised Dealer Report, published by AM this month and sent to senior executives at every UK franchised dealer group.