Two sales executives have fallen for the same Mini Convertible in Preston Lancashire...

And their battle for the car’s affections is being played out in a daily photo love story - believed to be the first by any Mini dealership in the UK, courtesy of dealer group Bowker.

The main protagonists are love-struck Larry and big-shot Barry (played by sales executives Simon Collinson and Chris Reid) are playing out their tragic love tale on Bowker Mini’s Facebook page this week (www.facebook.com/BowkerMini).

The story entitled ‘If loving a Mini Convertible is wrong - I don’t want to be right’ features a roller coaster of emotions, a romantic meal, fisticuffs, jealousy and all the drama of a classic love triangle.

For Bowker Mini, Graham McMurray who enjoys a cameo role as the boss in the photo story said: “People get attached to their cars. But admittedly not with the intensity of the characters in our story. We wanted tell a fun tale that would raise a smile. And I think we’ve achieved that. I think it shows that we don’t always take ourselves too seriously. And that’s a good thing.”

The five-episode story (see one below) has been written and produced by Preston-based The Buzz Factory. And the integrated campaign has also been supported with Facebook advertising.

“The Bowker Mini Facebook page has doubled its engagement figures compared with other weeks. Reach has quadrupled. And page 'likes' have increased by at a rate of over 700% compared usual levels. The feedback from customers has been amazing.

“We think there’s a massive opportunity for businesses to produce authentic entertaining content.

"Customers can sniff out a sales pitch at 20 paces. This kind of content is the antidote. It’s all about know, like and trust; so when they’re ready to buy they’ll think of our clients first. The photo love story has got the balance just right.”

And there’s still time to enjoy the final twists and turns of the story with the dramatic conclusion tomorrow, Valentine’s Day. 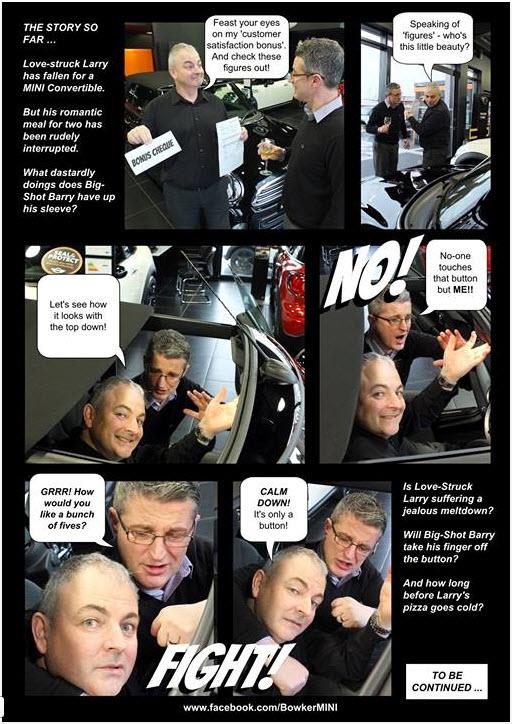