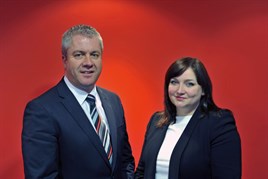 John McGuire, founder of Phoenix Car Company, has stepped into the role of chairman and chief executive at the dealer group and has appointed Russell Smith as its new managing director.

Debbie Hubner has also been appointed as sales and communications director.

McGuire said: “Russell has a clear understanding of the values and approach that have helped to make Phoenix such a success, having been a part of the team since 1998.

“The new role that Debbie takes on reflects the importance we see in effective communication across existing and emerging media as opposed to traditional marketing. We are keen to increase the depth and quality of dialogue we have, both internally and externally.

“I believe that having both at the helm and leading the strategy will help to ensure Phoenix pushes to even higher levels of success.”

Smith said: “Looking ahead, I am genuinely excited by the opportunities that lie ahead. We have a great forward-looking team and a business culture that is built around the customer and CRM.

"These are absolutely in line with the way that today’s customers wants to be treated, and indeed, through regulation has to be treated. It is a strength that ensures we are strong both in sales and aftersales. We also have a great at financial team, led by Financial Director Colin Johnston, which plays a vital role, both in their core financial skills, and in engaging totally with the development of all of our new innovations.”