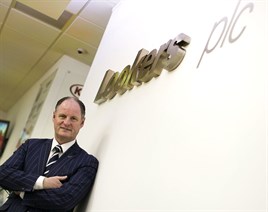 Top five AM100 dealer group Lookers has posted a 25% like-for-like  increase in new car sales during Q1 according to its interim management statement.

The group said new car margins had improved and its fleet volumes increased by 6% with a focus on higher margin business.

Lookers’ used car volumes increased by 8% in Q1 and the group also increased margins in the department.

Andy Bruce, Lookers chief executive, said the company had refocused its used car efforts on sourcing, pricing and stock management, as well as increasing leads and enquiries from lookers.co.uk.

Lookers’ aftersales business increased turnover by 9% on a like-for-like basis compared to last year as well as increasing the margin, benefitting in part from the growth in the vehicle parc of cars under three years old.

Bruce expects this trend to continue due to the increase in the new car market over the last two years. The group’s aftersales departments benefitted from a focus from the group on selling service plans to commit customers to longer term contracts for servicing.

The parts business also made good progress with revenues up 6% following a period of weaker comparatives and margins maintaining through overhead cost control.

Lookers acquired Colborne Garages in March for £33.6 million which included three Audi and two Volkswagen dealerships, one Skoda dealership and a Volkswagen commercial vehicle dealership, in Surrey and Hampshire, as well as a Jaguar, Land Rover and a Bentley dealership in Barnet, North London.

The Colbornes business is trading ahead of budget following the acquisition.

“This, together with the broad base of our franchise representation, the aftersales bias to the business and further recovery in the UK new car market, create a positive environment for further growth. We therefore anticipate that the results for the year ending December 31, 2014 will be ahead of current market expectations.”