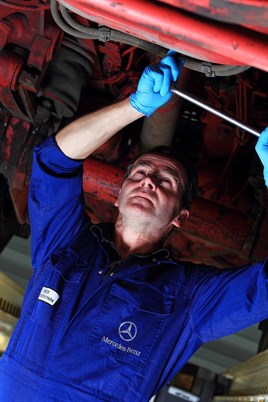 Some of the best selling cars have a one-in-four chance of failing their first MoT, according to data published today.

Consumer motoring advice website HonestJohn.co.uk has looked at data for the best performing cars based on registrations in 2010, and the likelihood of a first time pass.

The Honda Jazz has the best average for first time MoT performance in 2014.

However, in the website’s worst performing cars, there are some popular cars, including the Volkswagen Passat, that have shown a higher first-time failure rate.

Some of the failures are based on faults that a driver could spot and report before an MoT, such as windscreen stone chips or cracks in the driver's line of vision.

Honda CR-V
90% pass rate
Honda does well in the MoT stakes with two of its models coming out on top here. This CR-V may have been replaced by a new model in 2012 but it's proved adept when it comes to passing the MoT. It was one of the top performers in last year's MoT files so it's no surprise to see it doing well again.

Toyota Yaris
90% pass rate
Yes, it's another small Japanese car performing well when it comes to passing the first MoT. The Yaris may not have the character of other small hatchbacks but Toyota has long held a strong reputation for build quality and reliability which is borne out in its top three placing here.

Land Rover Freelander
89% pass rate
It's fair to say this result may surprise a few people. The Freelander is a very capable 4x4 but it doesn't have the best reliability record. In fact we have a catalogue of problems and faults from users. But that's not evident here and after three years the Land Rover performs strongly in its first MoT.

Mazda3
88% pass rate
This generation Mazda3 has since been replaced by an all-new model, but the previous one still has plenty of appeal with neat looks, solid build and a comfortable ride. It's also a strong performer when it comes to passing its MoT with an impressive 88% pass rate.

Toyota Auris
87% pass rate
The previous Auris was far from the most engaging car to drive, nor the best looking, but as with many a Toyota, it found favour with those looking for a well built and competent hatchback. It's also very durable as a first time MoT pass rate of 87% shows.

Mercedes-Benz E-Class
87% pass rate
It's somewhat surprising that there is only one German car in the top 10 cars passing their MoT first time. And more surprising that it's an E-Class when we'd have expected something smaller like a B-Class. But the executive saloon has surpassed expectations with a pass rate of 87 per cent.

Hyundai i20
86% pass rate
This is the first of two Korean cars in the top 10 but we were expecting more. That perhaps says more about how far brands like Hyundai have come in recent years. The i20 is due to be replaced in late 2014 but the current model performs well in its first MoT.

Kia Rio
86% pass rate
This Kia Rio, first launched in 2005, shows how far the Korean manufacturer has come in terms of design, quality and refinement. Yet it's retained its value for money and, judging by this result, its durability. The Rio has a strong pass rate of 85.9% so it will be interesting to see how its replacement fares in future years.

Renault Scenic
86% pass rate
Renault has worked hard in recent years to improve its reliability and its image among buyers. It seems that in terms of passing the MoT after the three years, that's having an effect as the Scenic is the only French model to appear in this top 10.

Citroen Grand C4 Picasso
63% pass rate
By far and away the worst performer when it comes to passing the first MoT is the Citroen Grand C4 Picasso. The seven-seat people carrier has a woeful pass rate of 63%. Almost a third of failures were down to lamps, reflectors and electrical equipment, more specifically head lights and brake lights. Other cause were problems with the electric parking brake and, worryingly, passenger and driver seats.

Volkswagen Touran
76% pass rate
Volkswagen owners will certainly not be happy to see several models in the bottom 10 cars. Especially given the reputation the brand has for build quality and reliability. Only three quarters of all Touran models tested passed with the causes for failure ranging from small issues like registration plate lights to more serious things like suspension and sub-frames.

Volkswagen Passat
76% pass rate
The news doesn't get better for Volkswagen with the Passat, which is the third worst performing car when it comes to passing its first MoT. Shock absorbers and suspension components seem to be more common reason for failure compared to other cars but we still expected better from the German firm.

Ford Galaxy
77% pass rate
Given the sheer number of Ford cars on the road it's perhaps surprising to not see more models from the manufacturer in the bottom 10. The Galaxy people carrier, a favourite among the more upmarket private hire firms, tends to fail on headlights, brake lights and indicators.

Seat Ibiza
77% pass rate
The Ibiza shares much of its underpinnings and mechanicals with the Volkswagen Polo which also features in this bottom 10. The main reasons for failing the MoT were driver's view of the road, which means a cracked or chipped windscreen, along with wipers and tyres. Seemingly all simple and obvious things to check.

Citroen C3 Picasso
77% pass rate
Given that they're typical family transport it's unexpected that MPVs feature in the bottom 10 cars here. Although given the rigours of the school run and often lots of short journeys, it's perhaps less of a surprise. Once again the main reason for failing was lamps, reflectors and electrical equipment with brake lights being a particular issue.

Renault Megane
77% pass rate
Many Meganes failed on lamps, reflectors and electrical equipment - a common area for cars to fail their first MoT on - but more worrying for Megane owners was a higher than average failure rate on suspension and drive shafts.

Peugeot 308
77% pass rate
The new 308 has just been launched in the UK and Peugeot will no doubt be hoping the model performs better when it comes to its first MoT after three years than its predecessor does. True this is a popular company car so you could argue that wear and tear is increased, but cars like the Mazda3 are similar and yet that has a pass rate of 88%.

Volkswagen Polo
78% pass rate
Not many people would have predicted Volkswagen featuring in the bottom 10 cars for passing their MoT first time. One thing you can say about the Polo is that the number tested, almost 30,000 cars in total, is far greater than any other model in this list. That said it's still a surprise to see a pass rate of less than 80% for the popular hatchback.

Fiat 500
80% pass rate
The popular Fiat 500 is a choice among younger drivers and this perhaps explains the lower MoT pass rate. Younger drivers can be harder on their cars and routine maintenance is sometimes neglected due to the costs.