Exclusive: 'Honda is on the mend' - dealer council chairman 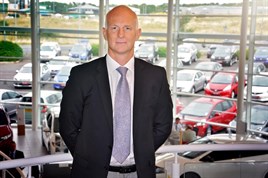 A lack of new models, particularly in segments it used to be strong in, has led to year-on-year decline in the Honda brand. Its reputation for technological innovation has also paled as a result.

A total of 56% of the network took part in the survey, which is one of the highest response rates – and looking broadly at the correlation between responses and results, if dealers weren’t happy they were more likely to take part.

Honda's woes are clear to see in its historic registration and market share figures (Source: SMMT/AMi)

Two key metrics of the NFDA Dealer Attitude Survey, dealers' rating of the manufacturer and franchise profit. Honda (green), measured against two brands that have taken share from it, Kia (black) and Hyundai (red). Source: NFDA/AMi

AM talks to Honda dealer council chairman and managing director of Cox Motor Group David Cox (pictured) to explore the problems and understand why he, and the dealers he represents, are feeling positive about the brand.

AM: What are the causes for the lack of confidence in the brand?

David Cox: Generally there are three areas that have dented dealer confidence.

Firstly, the lack of new models and a reduction in the sectors of the market which Honda competes in.

Historically Honda has been at the forefront of new product development.

Unfortunately this has not been the case in Europe for the past few years and as a result, the dealer network has been starved of new models whereas other manufacturers have launched new products in sectors where Honda had previously excelled.

Secondly, and perhaps felt more acutely this year, is the way Honda has been so eager to get new cars out on the roads and has forced the market.

Dealers though, generally agree that a sizeable volume of Honda cars have to hit Britain’s roads every year to sustain future aftersales business and give the brand much needed visibility.

Thirdly, the concern is that the first two will erode profitability, although it has to be said there is currently little evidence of that and the average profit generated by the franchise has been relatively strong both this year to date and in previous years.

AM: Is it all model based – therefore leading to the failure to recover market share - or what other factors are playing a part? Which ones if so?

DC: Model variation and new model launches are a source of frustration and I think the network want to get that message across to Honda loud and clear.

Actually, it’s a question of famine to feast as next year sees an all new Jazz, and the brand in a new segment with a small SUV, which incidentally I have driven and it’s a cracker.

There is a return of the much missed Civic Type R and NSX sports car along with new engine and gearbox combinations and facelifts for the current range.

It’s remarkable really - and so much to look forward to - but the dealers have every right to voice their opinion that it’s taken too long.

AM: Are dealers talking about dropping the franchise for one they consider more profitable long-term and if so, how many and what are the favoured franchises.

DC: I never fail to be impressed and surprised by the staying power and resilience of the network in this regard.

There seems to be next to no wavering from the network and I can’t think of any re-franchising of note.

But is it really that surprising?

With network profitability holding up generally, a rich history of unrivalled product quality and industry unique loyalty amongst Honda customers are strong arguments that Honda’s future in the UK is set to be even brighter that it’s past.

Clearly the National Franchised Dealers Association survey results may prompt potentially acquisitive companies asking some pretty probing questions, but after understanding the facts I don’t think new entrants to the brand will be too discouraged.

I’m aware now of groups that want to get into the brand and that’s fairly understandable.

Sometimes we forget that Honda is the 20th most valuable brand in the world (as reflected in Forbes listings) and the temporary fall in the UK is just that, temporary. To use a sporting analogy “form is temporary, class is permanent”!

AM: What is the average RoS and how are the upper quartile performing?

Clearly that is not where dealers or Honda want it to be and the NDC is constantly referring to the need to improve ROS.

Both parties are mindful that the upper quartile last year made 2.9% and almost £300k.

As I’ve said elsewhere we have put some firm stakes in the ground to secure future profitability through retention products, but realistically the real game changer will be the new products in 2015.

AM: Customer satisfaction comes from staff satisfaction, so how is the evident dealer attitude to Honda impacting on customer service? What are the customers buying and why? Is it product or is it also the people the network has?

I genuinely think that the dealers have done brilliantly in keeping staff motivated and engaged, and customer satisfaction is really strong.

Honda’s own surveys show ’Overall Satisfaction’ in Sales is solid through 2014 at 93%, and also in service at 87%.

Customers are buying a roughly even mix of Jazz, Civic and CR-V and mostly are now buying through PCP (70%+ in P3) with a five year service plan in nearly all cases (90%+ in P3), guaranteeing loyalty in the future.

The product is excellent and customers love the cars, but it’s the people who make the difference in the network and that’s what we have to focus on.

Dealers tell us that this year especially they have lost good people and it’s not always easy replacing them.

They sometimes complain that Honda can complicate matters and make it difficult to deal with them on a day to day basis. I think the brand can definitely improve in that area. I also believe the brand sees this – the new leadership team is in constant dialogue with the NDC as to how this can be achieved and I think we will see some radical changes for 2015.

AM: There has been unhappiness in the network for some time. This suggest long-term problems. Why isn’t the situation improving?

DC: You are right; this hasn’t happened overnight. There has been a lack of investment in new Honda products for Europe over the last few years, that all changes next year with a flood of new product making the picture much rosier.

AM: Is Honda proactively trying to sort out the issues it has, either with Japan or in the UK. Provide an insight into the communications it has with you as NDC chairman. What are dealers talking to you most about?

DC: Dealers have raised all the issues that I’ve covered and more which certainly prompts us to have some very robust discussions with Honda UK and we certainly couldn’t accuse them of not involving us in a lively debate on how the challenges can best be met.

Proactivity is there in spades and one of the most impressive things is the way that Honda have involved the NDC on an unprecedented scale recently.

A large party of NDC members and top dealer investors travelled to Japan this year to see for themselves the new products in development, then another group went to see images of the next generation Civic at Honda’s European design facility in Frankfurt.

This many not sound like much, but the Japanese allowing access to dealers at this early stage just does not happen easily and it firmly reinforces Honda’s commitment to the European markets and the UK in particular.

The other point really worth mentioning is the sub group working parties that have spawned from the NDC, debating topics such as marketing, aftersales, business terms and targeting etc and these are having a really positive impact with many new policy decisions being made by Honda (UK) as a result.

It shows that Honda want to listen and I know dealers will agree with that, but they want to see big changes and quickly so that investment continues to be a wise one.

AM: Honda has a reputation for fantastic product, so what has gone wrong? Is the 1.6 diesel too little too late?

DC: We wanted it sooner but it’s been a really positive factor this year and well worth the wait.

I understand there is much more development for the unit too, including mating it with an all new nine-speed auto gearbox in a high power derivative.

AM: When will the situation improve and what factors will lead to this improvement?

Given the line-up arriving in 2015, it would have been easy to sit back and wait for a silver bullet, but the past couple of years have been dedicated to ensuring that the underlying strength of the brand is improved dramatically.

The focus on catching up with the market on PCP is starting to bear fruit and a relentless focus on five-year service plans will make the brand unbeatable in terms of customer loyalty in future years. Add this to the line-up rejuvenation and you have a very exciting future – but it cannot come quickly enough.

AM: Outlet numbers have remained pretty stable over the years. Why? Honda must be doing something right for you. What?

DC: That’s absolutely right, of course they are.

As I said the brand is one of the top 20 in the world and he global R&D spend is staggering.

We are going through a really tough time in the UK at the moment, but by working together we and the manufacturer will get it right.

Dealers are understandably frustrated with the current situation, but I think most recognise that over the longer term the franchise has offered a good opportunity and will continue to do so in the future; hence that stability to which you refer.

That is not to say that dealers don’t express their concerns, and so they should but the fact that their expectations of their relationship with Honda are so high is surely an indication of the value they place on that relationship.