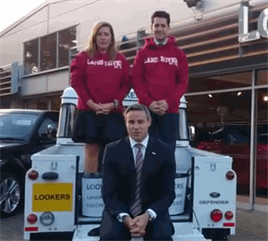 Nigel McMinn, managing director of dealer group Lookers, has become the latest resident of dealer land to get an ice cold soaking for charity.

Following in the soggy footsteps of bosses such as Hyundai president and chief executive Tony Whitehorn and Toyota sales director Ewan Shepherd, who underwent the ice bucket challenge last week, McMinn stepped up in aid of automotive charity Ben.

McMinn, who was nominated by friends, was sat in the back of a Land Rover Defender while two of his colleagues stood behind him with large buckets of cold water.

Wearing a suit and tie, he nominated fellow Lookers' colleagues and also friends from other dealer groups to do their ice bucket challenge.

His first nomination was the whole of Lookers' operation board, including chief executive Andy Bruce.

Next was his friend and neighbour Robert Forrester, chief executive of Vertu Motors, and finally Alex Smith, the brand director of Volkswagen UK was nominated.

All those that have been nominated now have 24 hours to complete their ice bucket challenge and post their video onto social media.