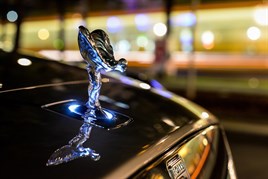 Rolls-Royce Motor Cars has announced that a new Technology and Logistics Centre will be built at Bognor Regis, close to the Rolls-Royce factory at Goodwood, West Sussex.

The new 30,000sq m centre, eight miles from the factory, will allow for future expansion and will employ 200 people, including a number of new roles created in addition to those transferred from existing logistics functions.

It is planned to be fully operational in early 2016.

The Technology and Logistics Centre will consolidate three current operations – an inbound warehouse for production parts; a distribution centre, including an inbound body store and finished car store and a workshop for car preparation.

The centre will be managed on behalf of Rolls-Royce Motor Cars by an external logistics provider.

Torsten Müller-Ötvös, chief executive for Rolls-Royce Motor Cars, said: “I am delighted to announce our new Technology and Logistics Centre, which reflects the sustainable development and ongoing success of our business. Every Rolls-Royce motor car is built at the home of Rolls-Royce at Goodwood and this new facility will provide the required local logistics support for our current and future models.”

He continued: “Rolls-Royce is a British manufacturing success and we remain fully committed to building our future here in West Sussex.”

Business Minister Matthew Hancock, said: “This terrific new centre at Bognor Regis will give a huge boost to the local economy, and safeguard 200 jobs. It’s testament to one of our Great British success stories, Rolls-Royce, and its valued contribution to UK manufacturing.”