Dealer performance stats for November backed up a recurring theme for 2014 - plenty of sales, with exceptional profits made in the quarter end months as dealers recognise bonuses.

ASE chairman Mike Jones said: "Whilst this was expected, it shows the extent to which UK motor dealers are now experiencing increased peaks and troughs.

"All is definitely not doom and gloom, however, as dealers showed turnover increasing 13% in the month, which bodes well for the hitting of Q4 targets. The combination of the higher level of sales and decreased profits produced an exaggerated effect on the rolling 12 month return on sales percentage which dropped by 0.05% in the month.

"Given the sales levels in both the final quarter to date and the overall year, we would expect dealers to outperform in December and close out the year with another record performance, beating last year’s Return on Sales of 1.47%. Given the increase in sales the bottom line profit will certainly improve year on year.

Departmental performance continued with very little movement during November. Overall efficiency continued to creep forwards, improving aftersales performance, however this was once more outweighed by overheads which we have now seen increase by 7% over the course of the past year.

Used car performance remained stable during November however we are expecting an influx of self registrations during December which may depress return on sales for the year and prove a challenge for the first half of 2015." 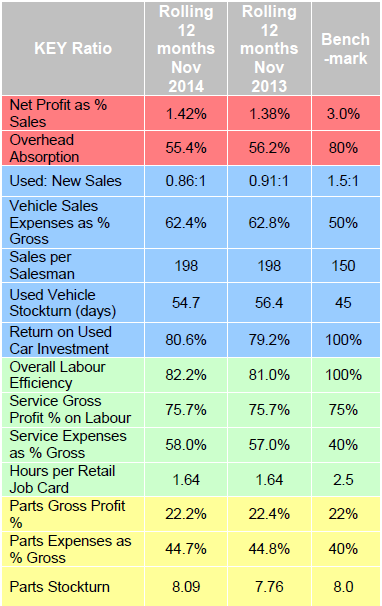